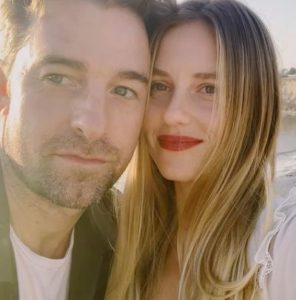 In May 2021, Actor Scott Speedman revealed he was having a baby! He and his girlfriend Lindsay Rae Hofmann seemed very excited to announce that they are welcoming a baby. In an IG post, Lindsay showed off her pregnant belly on her Instagram. So, naturally, fans wanted to know more about their relationship.

Scroll down this Lindsay Rae Hofmann wiki to learn about Scott Speedmann’s girlfriend.

That’s what Lindsay Rae Hofmann wrote on Instagram when she turned 30 years old in July of 2020. What’s more, she celebrates her birthday every year on 5 July. Per that fact, Cancer is her zodiac sign.

Lindsay Rae Hofmann was born to her father Doug Hofmann and her mother Laura Hofmann. Her parents were together for at least 2014 and no further updates surfaced from that point on. They celebrated their marriage anniversary every year on 6 October.

As a daddy’s girl, Lindsay always wished her father a happy birthday. On his birthday in 2015, Lindsay took to her Instagram where she wrote,

As for her mother, Laura hailed from Palos Verdes Estates in California. She attended Palos Verdes High School. As of this writing, she co-owns Fringe, a home decor & gift store based in Redondo and Manhattan beach.

More on her family: Lindsay has at least one sibling; her brother Lane Hofmann. Lane is married to Liz Hofmann. They tied the knots on 16 July 2017. Together Lane and Liz, welcomed their first child in 2018, making Lindsay an aunt.

Yes, of course, Lindsay is dating an actor. But, she is no lesser than a model if we have to talk about her physical appearance. She has long hair looking like a fall made out of honey.

To unfold details on her social media reach, Lindsay Rae Hofmann earned 2443 followers in total where she posted 186 times as of 10 May 2021. Then, she is also on Facebook where she hadn’t updated any new posts since December of 2019.

To everyone’s surprise, Lindsay couldn’t be discovered on Twitter.

Professionally, Lindsay Rae Hofmann is an entrepreneur. She completed her high school education at Palos Verdes Peninsula High School based on her hometown where she grew up.

After completing high school, Lindsay attended the University of Arizona, College of Agriculture & Life Sciences. She landed an associate’s degree majoring in nutritional sciences while she studied general studies.

Lindsay started her career by joining Vivienne Westwood. She joined the business in October of 2011. She worked there for three months quitting in December of 2011.

From July 2012, Lindsay joined Bollare where she joined as editorial account manager focusing on fashion. She worked for brands such as ACACIA Swimwear, Faithfull The Brand, Las Baydas, Tori Praver Swimwear, TRIANGL Swimwear, and ViX Swimwear.

Moreover, Lindsay Rae Hoffman co-founded Juillet Swimwear in 2017. She also started working as a brand consultant in January of 2017. Furthermore, she sits on a total net worth of $300 thousand.

While not busy running a business, Lindsay loves traveling around the world and having fun with friends.

Actor Scott Speedman first appeared in Lindsay Rae Hofmann in April of 2017. Whereas in July of 2017, two attended the wedding of her brother Lane Hofmann. It was the third time, he was featured on her social media.

On 2 September 2017, Lindsay celebrated Scott Speedman’s birthday. She wished him on Instagram, writing:

In November 2018, Lindsay and Scott celebrated two years of dating each other. She wrote a post on her IG and it read:

“two years together and still struggling to get the pic ✨🌻💛”

However, the couple shared no details on ever being engaged as of May 2021. So, there was no point in asking if the two got married. Showing off her belly in a see-through dress, Lindsay wrote: