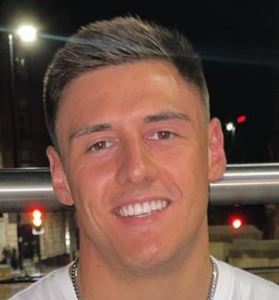 The reality dating shows do not seem to end. So far, Love Island was keeping the fans hooked to their TV screens and now Ready To Mingle will fill the shoes. Lewis Crocker was one of the singles who were “ready to mingle” in the show.

Before the show kicks off come September, get to know this Lewis Crocker wiki. Find out interesting details about him like his age, his job, his height, etc.

Lewis Crocker On Ready To Mingle

Ready To Mingle will follow one single woman and her 12 suitors. Its format was a mix between The Bachelorette and Fboy Island. The 12 men would try to win the affections of one lady.

Among the 6 girlfriends of 6 untruthful suitors, only one was announced, Shannon Garrett. The name of the leading lady was still a mystery.

Ready for Mingle was filmed around a luxury clifftop apartment in Torquay, Devon, England. The show was set to premiere on ITV in September and will be hosted by the Canadian comedian Katherine Ryan. The exact date has not been announced yet.

Lewis Crocker is a young man, born before 1995. As of 2021, he must be at least 26 years old. He celebrated his birthday every year on 5 September. And thus, his zodiac sign was Virgo.

Lewis Crocker’s mother is Tracey Clayton. Although we do not know anything about her, she has appeared quite a few times on her son’s IG. His father, on the other hand, appeared only rarely on Lewis’s IG.

Lewis Crocker is a tall guy with a muscular body. He stands at a height of 5 ft 11 inches. Lewis is a fitness fanatic and had a very fit body. Many of his Instagram posts are about him working out in the gym.

He also has a few tattoos, most of them on his arms. Lewis has a large tiger tattoo on his forearm and a couple of smaller ones on the inside of his arms.

As of 23 Aug 2021, Lewis Crocker was present on Instagram and was quite active there. But other than that, we could not find him on any other social media platforms. On his Instagram handle @lewiscroker_, he had 235 posts and 1.1k followers.

According to the bio on his Instagram, Lewis Crocker is a firefighter for Devon and Somerset Fire and Rescue Services, a job he started in August 2019. It seems Lewis is loving his job. He often puts posts on his Instagram about his work and co-workers. In the two years, he seems to have friends of his co-workers.

Lewis used to be a rugby player. Although he never made it big, he used to play the sport. At one point, his team did appear on papers, possibly when they upset a stronger team. Lewis still worked as a sponsored athlete.

An average firefighter in the UK earns a salary of £37 thousand. And considering that Lewis had spent two years in his job as a firefighter, he must be started to earn somewhere near to that number. Plus, as of 2021, Lewis had amassed a net worth of about $250 thousand.

According to some of the sources, Lewis Crocker was one of the six liars on Ready to Mingle. And his real girlfriend was none other than Shannon Garnett. Shannon was the only girl cast member who has been announced by the showrunners so far.

This news, however, was not confirmed and you would have to watch Ready to Mingle on ITV to confirm it.