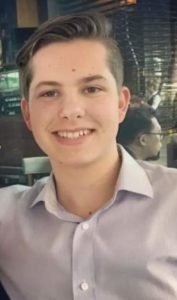 It’s been more than three decades since Candace Cameron Bure started doing the fan-loved character of D.J. Tanner-Fuller in the Full House until now when she is seen in the same role in the sequel series Fuller House.

Today, not long after her long-time portrayal was put to rest after Fuller House‘s fifth and final season (concluded in June 2020), she continues to be surrounded by the same level of media and public attention, if not even more. And, in 2020, with the announcement of her son Lev Bure’s engagement to his beautiful girlfriend.

So, naturally, at a time like this, people wanted to know more about her son— who actually is Lev Bure, is he as much ambitious as his mother, and things like that.

Tune in till the end and find out, in the writing below.

Lev Buire grew up celebrating his birthday, every year on the 20th of February. So, one can say his zodiac sign is Pisces.

Lev became one of the three luckiest to be born to their celebrity parents.

While his mother, Candace is an American actress, producer, author, and talk show panelist, his father, Valeri Bure, too created an empire of his own.

To be precise, Valeri is a retired Russian professional hockey player. He happens to be the younger brother of NHL great Pavel Bure. He played 10 seasons in the NHL after he was selected the 33rd overall in the 1992 NHL Draft by the Montreal Canadiens. 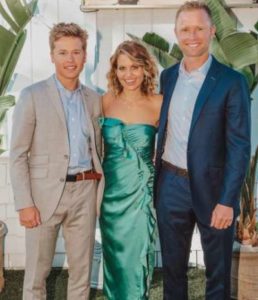 Lev Bure is the middle child, among his two siblings. He has an older sister, Natasha Bure (born 1998), and a younger brother, Maksim Bure, two years his junior.

His eldest one, Natasha competed in the eleventh season of The Voice, when she was 18.

Lev Bure had 157K followers on Instagram (until 23rd April 2021). While he had a regular number of people following on his Twitter profile.

He also owned a self-titled YouTube channel with 1.34K subscribers.

Lev himself did not seem to have a TikTok profile but his actress mom appeared to be liking it a lot. Her fans could not be happier when she revealed she was finally joining TikTok. Lev, however, had left a hilarious comment— “OK, I’m in 🙈😜”— on her debut video.

Lev, stepping onto his dad, his uncle, and grandfather, Vladimir Valeryevich Bure’s footsteps (a Russian former freestyle swimmer and a fitness coach), played Hockey. The Elite Prospects reported his profile and stats for the North American Hockey League and showed Lev’s affiliation to Odessa Jackalopes.

Although, no further details were revealing— how far he wanted to go playing Hockey.

Meanwhile, he and his mother quite openly expressed his other passion i.e. for preaching.

Lev, quite frequently shared images from his preaching services on his social media.

After graduating high school in June 2018, Lev Bure went on to pursue higher education at Sheperd Church’s Bible college. According to the college’s website, after completion of the course, each student will receive a Certificate of Ministry from Hope International University.

In the meantime, in his name, Lev Bure reportedly saved a net worth of $150 thousand.

While his father, owner of Bure Family Wines, hoarded $14 million, until 2011.

Soon as he stepped into his twenties, Lev Bure went down on his knees and popped the question to his gorgeous girlfriend Taylor Hutchison. 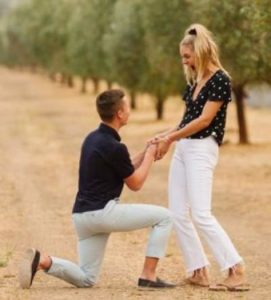 The young Christianity-preacher took to his Instagram the proofs of their engagement. So this happened on 30th August 2020 as he shared a caption— “All glory to my Lord and Savior Jesus Christ! I cannot wait to be your husband! 💍”.

Earlier in May 2020, the young couple had celebrated their very first anniversary.

His to-be wife, Taylor did the same on her account with 30.1k followers. Looked like they besides their undying affection for one another, also share a similar belief in God. Her bio on Instagram reads: “Eyes fixed on Jesus!!!”.

Then, everyone in the family, publicly away their blessings for the couple.

Jef’s mother, Candace, was especially dancing in the air. “And this mama/mama-in-love can’t wait for wedding planning shenanigans”— she wrote followed by the big announcement of her boy’s ceremony in Napa, California.

Now, fans waited until the star-mama makes the wedding announcement! Instead, Cadance broke the news of Lev and Taylor’s split in April 2021. According to Cadance, neither Lev nor Taylor were heartbroken. She further revealed the decision to call the wedding was mutual.

They made news of their blooming “teenage romance” after attending Levi’s high school prom back in May 2018. Eventually, six months after they began dating, they split, for some reason.