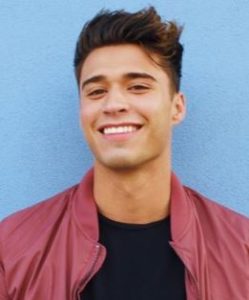 Carrington Rodriguez from CBS’s Love Island season 2, comes off strong and arrogant, but those are traits that made him an exciting contestant in the show people would turn their eyes and ears to. Soon after he arrived at the villa, Carrington caught everyone’s attention with his charm.

Delve into this short wiki based on the life of Carrington Rodriguez to know more about his life, career, and rumor of being gay.

Carrington Rodriguez is one of the reality stars who share is birthday with football player Tom Brady which falls on August 3rd. But almost half of the age of Brady, Carrington turned 22 years old while celebrating his birthday in 2020.

Born as a Leo, Carrington boasts character traits such as warm, passionate, humorous but has to overcome the traits such as arrogant and stubborn which that perfectly matches him.

Hailing from the hometown of Salt Lake City in the state of Utah, Carrington Rodriguez was born to his anonymous parents in Bitburg, Germany. Later his parents moved to the U.S. who offered little to no details on them.

Along with details on his folks, info related to Carrington’s possible siblings also escaped the public knowledge.

His Greek-god and triangle face with a strong jawline gave him distinct features making him undoubtedly popular with female fans of Love Island. While Carrington Rodriguez stood tall at the height of 5 feet 7 inches (1.70 meters), he weighed 74 kilograms (163 lbs) as of August 2020.

Plus, he dressed up casually, but suit and tie, every once in a while made him look like a James Bond movie try out.

Being the man of people is one of the necessary traits for the contestants to win the show Love Island. But when it comes to social media reach, Carrington still had a lot of work to do on that front.

When Carrington arrived in the show, he introduced himself as a sales manager working in his hometown of Salt Lake City. He attended Layton High School and graduated in 2015. Of all the interests he had as a high school kid, Carrington played for the school’s varsity baseball team.

After graduation, Carrington enrolled at Dixie State University majoring in General Studies. At the start of his career as a salesperson, he joined Brio Energy in June of 2017 and worked as a member of the Summer Sales team.

After working for four months, he joined Visible Supply Chain Management. Carrington started in the company as a brand development executive and went on to become Parcel Account Executive. Before, stepping down from the company, he worked in the position of Sr. Parcel Executive US for eleven months.

He also worked for EasyPost as Enterprise Account Executive for a year.

Starting from November of 2019, Carrington has been working in FirstMile a Rakuten Company as Brand Development Manager.

Carrington saw both career and financial growth while working at the executive level. The Utah-native claimed to have closed millions of dollars of sales deal and the company did pay him handsomely.

Plus, Carrington Rodriguez bagged a total net worth of $250 thousand.

Carrington Rodriguez never did appear as a person who would hesitate to unfold details of his dating life. He arrived at the front door of Love Island bragging about plenty of dating experiences. Before coming to the show, he did stay single for three years after the end of a relationship.

Though he omitted to divulge information on his girlfriend, Carrington did mention having regrets not going after what he had with the then-potential wife.

But as an optimistic person, which he is, Carrington looks forward to finding someone better on the show if possible on the show. Conclusively, Carrington Rodriguez is far from being gay.

After the premiere of the first episode of CBS’s Love Island, Carrington has linked with Kierstan Saulter after she chose him for the first date. They enjoyed a lovely evening together in a scorching tub.