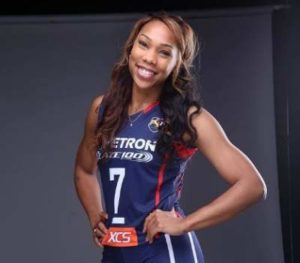 Khat Bell went to North Mesquite High School and studied Community and Youth Studies at The University of Texas at Austin.

As a professional volleyball player, she previously competed for the GS Caltex team in South Korea, and the Petron Blaze Spikers in the Philippines until she landed on the sets of The Circle to win the lucky US$100,000 reward.

Khat Bell was born Katherine Briana Bell in the year 1993. She celebrates her birthday every year on March 5th. So, her zodiac sign is Pisces. In 2020, as she turned 28, she shared a long “over-the-moon”, overwhelmed, and self-love-filled writing with her Insta-fandom.

Khat Bell hails from her hometown of Vallejo, California, and now lives in Mesquite, Texas.

Her parents are named Kenneth Bell and Regina Williams. For siblings, Khat has two sisters Cajun Williams (31) and Ashley Williams (26), and a brother Wendell Williams (30)— (ages were likely listed in 2014).

Of all, Khat clearly deems very highly of her mother. Like everyone, she believes “the apple never fell too far from the tree”, i.e. it got it from her momma, what it takes to become the strong, independent woman she is today. To her mother, now and then, Khat would dedicate the likes of:

“Thank you for teaching me how to be a woman of my own and to curse out everyone while doing it. Something that no schooling could ever teach..to wear my own damn crown! MOMMA I LOVE YOU..P.O.P, holding it dineeeee🌹”

Standing at 6’ (or 6’7” in heels), Khat Bell clearly has the height to make her a natural at the sport, besides the skill to back it up.

Khat Bell On The Circle

Khat Bell participated as one of the two new players (alongside Mitchell Eason) in season 2 of The Circle.

As a pro athlete, she came into the American reality game series that has been compared to Big Brother and Catfish in format, as well as the Black Mirror episode “Nosedive”, in the concept of ratings.

The second season began airing on April 14, 2021, and so far we saw Khat, with amazing catfish detecting skills, build connections with Mitchell and Trevor (aka Deleesa Carrasquillo), and attempting to cozy up to Chloe Veitch.

In her intro-video for the show, Khat said she wanted to be on The Circle because she wished to show the world, Black women are young, beautiful, and bright. The up-and-coming amateur would love to be seen beyond the stereotypes that have been painted.

Khat Bell’s Facebook profile listed her job (in April 2021) as the professional volleyball player of Petron Blaze Spikers. Besides, there were speculations that she is also playing in Turkey. If that is true, she is supposed to earn an average 55.738 ₺ (per hour) salary (as per a salaryexpert.com report).

This way, in the meantime, her reported net worth is above $400 thousand.

Just so you know: The average first division volleyball salaries for women athletes are higher as compared to male athletes in Turkey.

It is believed Khat Bell is no longer together with her ex-boyfriend Hasan Yiğit Seçkin. However, she clearly did not feel like deleting memories of him from her social media accounts. 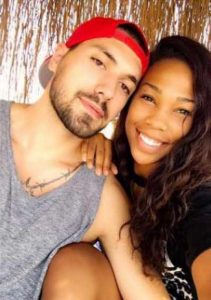 The last time, Khat’s followers saw Hasan with her was on Jan. 8, 2018, when they took a lovey-dovey selfie while on a lift. The year before, she wished her “boo” on his 27th birthday writing,

“Happy birthday to my BOO👻! Hahah I’m so excited I get to spend your 27th birthday next to your side…taking your gifts,your money, eating your food, and drinking all of your alcohol😁I mean? What are girlfriends for? I love you askim❤️”

A few days later from the birthday celebration, she could not stop herself from writing:

“I know you just left yesterday and I always post about you and it maybe a little annoying but… I DONT CARE!! love and miss you!!!! Hurry back to me mutha f*#%er!!!! 💋❤️”

About Hasan— just like Khat, he is into sports, judging from his display picture on Instagram which showed him amid getting the ball into the basket (during of course a basketball game).

Apart from Khat’s romance with Hasan, her dating life remained a mystery to even her followers on social platforms.