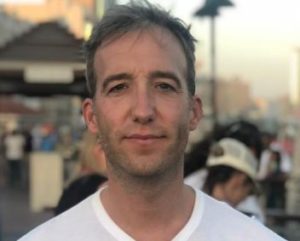 It’s a lovely moment watching the Hollywood stars giving back to the individuals who played an important role in their lives, and we have HGTV’s Celebrity IOU to thank for that. This time, receiving the gratitude of the actress/businesswoman Gwyneth Paltrow is the man who has worked with her for over 11 years, Kevin Keating

So, who is he? Delve into this Kevin Keating Wiki to learn all about him.

When it comes to Gwyneth Paltrow, there are multiple faces behind her success like Elise Loehnen, but if she had to choose one it would be Kevin Keating. According to her, Kevin was the person she spent the most time with and more than with anyone else over the past decade.

She called him her “friend, right-hand supporter, protector, and guardian angel.”

“Kevin has been an incredible constant in my life, and I trust him with everything. He’s my right-hand man. He’s such a good person, and he’s always taking care of other people,” she added.

Furthermore, she was so impressed with Kevin that she named her GOOP-related products after him; such as the Keating blazer. Also, Kevin was depicted in the “Nurse Kevin” character featured in Gwyneth company’s newsletter and reminders to shoppers.

Thus, when Gwyneth was approached by HGTV, she chose the name Kevin Keating and decided to surprise him with a major home renovation. The plan was to work with the Brothers to rebuild Kevin’s home that “has great bones but is very dated” — demolish the kitchen, re-plaster the fireplace, and install a new iron staircase railing.

“Words truly cannot express how much I love Kevin. He’s my family. He has done so much for me over the past decade-plus and I just am so excited to be able to do something for him,” Gwyneth shared.

Corresponding to his birthday, Kevin is of the Libra zodiac.

Gwyneth-vouched “guardian angel”, Kevin Keating might be a “savior” to the Emmy Award-winning actress, but to his family, he was their lovely boy. The three women in his family loved him to the moon, and so did he.

Also, Kevin was the best uncle to his sister’s two kids. In August 2015, Kevin took it to his IG to flaunt his uncle’s duties captioned, “by the way, Call Me Daddy #nephews”.

As of 2021, Kevin resided in Santa Monica, California. Previously, he lived in LA (to where Kevin moved from his hometown in 2001).

As of July 2021, Kevin entertained 4.5K followers over Instagram @kksquared.

Most of his posts then featured his adventures — riding bikes, road trips, and time with friends. Overall, since Kevin’s work required him to jet-set around the world, he decided that he might as well document it.

He has been to places including Jamaica, England, Spain, and the United Arab Emirates.

Kevin Keating garnered a net worth of over $800 thousand in 2021. And yes, it can all be credited to his time working for the star actress, Gwyneth Paltrow.

Did you know: Kevin is also a philanthropist. Though he might not be donating lumps, he liked to participate in charity events. The last we saw him was in May 2016 where he ran 13.1 miles at the Bruce Paltrow Fundraising program.

Kevin Keating Partner, Is He Gay?

Yes, Kevin Keating is gay. As of 2021, he was dating the fashion influencer Adam who went by the moniker “@hiswayofwalking” on Instagram.

Kevin’s partner, Adam is a lot younger than him and celebrates his birthday on June 18. Find him over IG @hiswayofwalking.

In April 2019, after Brunei implemented stoning gay people to death under its new LGBT laws, Kevin took it to his IG to express his strong disapproval with hashtags  “#WTF #humanrights #love #boycottthesehotels #gay #lgbt #beverlyhillshotel #dorchesterhotel”