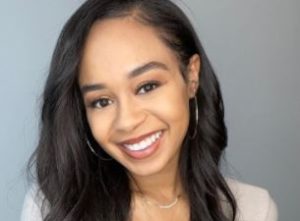 Jasmin Lawrence might be an aspiring actress, but she is more popular as the daughter of the comedic actor Martin Lawrence. Moreover, the spotlight on her blew through the roof after she started dating Eddie Murphy’s son Eric Murphy.

Keep reading this Jasmin Lawrence Wiki to know more about her.

Jasmin Lawrence was born on January 15, 1996. That made her 25 years of age when she first revealed her boyfriend Eric Murphy in 2021.

The Capricorn queen celebrated her 25th birthday indoors inviting only a few of her friends. After the celebration, she took it to her IG to write,

“My heart is truly full and I can’t stop smiling. I look forward to what God has planned this year. Trusting and thanking Him for my many blessings every step of the way. 25, I’m ready!”

Jasmin Lawrence is the daughter of the activist Pat (Southall) Smith. She is known for her eponymous brand of motivational speaking and activism, Pat Smith Enterprises. Also, if this rings a bell to you, Pat was one of the 5 women who received the Les Femmes du Monde‘s Women of the Year award.

Pat married Martin Lawrence (Jasmin’s dad) back in 1995. Unfortunately, their marriage only lasted a year. In April 2000, she then married the NFL running back Emmitt Smith (Jasmin’s stepdad) and they went on to cherish 20 years of marriage with three children until they separated in 2020.

Overall, Jasmin loves her mother and the mother-daughter has also appeared at a few events together. The last we saw them was on a virtual event titled Notable to Notable in September 2020.

Talking about Jasmin’s brothers and sisters, she has a total of five half-siblings. Naming them:

Judging from her IG posts, Jasmin seemed more close to her half-sisters from her father’s side rather than others. She often wished them lovely messages on their birthdays and shared how much they meant to her.

Also, talking about IG wishes, Jasmin composed a long caption dedicated to her dad on Father’s day 2020. A part of which wrote,  “I’m so incredibly blessed that God gave me a father like you. You remind me daily of how loved I am and for that, I’m so so grateful!”

As of July 2021, Jasmin flaunted 172K followers over Instagram @jasmin_lawrence. Most of her posts then only featured herself, and few pics were about her family.

Jasmin Lawrence garnered a net worth of under $500 thousand by 2021. Likewise, her father Martin Lawrence flaunted a stunning $110 million net worth then.

Following in her dad’s footsteps, Jasmin stepped into the show business in 2020 appearing in one of his Bad Boys for Life movies. She portrayed a gorgeous door woman while her dad Marin played Marcus Burnett.

Later that year, Jasmin also appeared in a series Family Time as “Angela”.

But that wasn’t Jasmin’s first time on TV. She previously appeared on Family Feud with her mother and stepdad in February 2018.

In light of her education, Jasmin graduated from Greenhill School and went on to join Duke University in Durham, NC. During her time there, Jasmin was involved in cheerleading and became a Delta Sigma Theta Sorority member. She graduated from the university in May 2018, wearing a red dress.

Jasmin Lawrence first revealed Eric Murphy to be her boyfriend through an IG post on Eric’s birthday i.e. on July 10, 2021. She wrote,

“Happy birthday, my love! I’m so incredibly blessed to know you, to love you, and to have you by my side. Cheers to many more blessings, laughs, and beautiful memories! I love you so much!!”

But it seems that Eric won this race by posts a lovely picture of them over his IG on June 25 captioned, “Head over heels in LOVE with YOU @jasmin_lawrence.”

So, we guess that Jasmin and Eric started dating in early 2021.

As of writing this article, the two weren’t engaged yet. 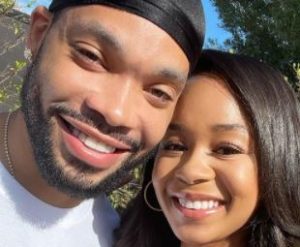 If you don’t know, Jasmin’s dad and Eric’s dad Eddie Murphy have worked together back in the 1990s movie Boomerang and Life (1992). Over the comedic film, Martin plays the role of Tyler, and Eddie portrays the lead Marcus; who is a successful executive and womanizer.