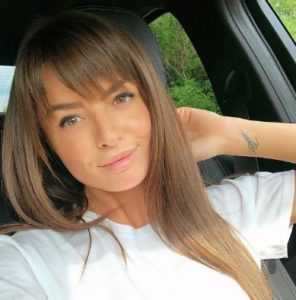 Anett Böszörményi is best known as the fiancee of Hungarian tennis player Marton Fucsovics. She started trending when commentator Boris Becker made sexist comments about her. This gathered backlash for Boris and attention towards Anett.

Scroll down this Anett Böszörményi Wiki to learn more about Marton Fucsovics’ fiancee.

Anett Böszörményi turned 29 years old in August of 2020. She celebrates her birthday on 11 August every year. What’s more, Anett is a Virgo by zodiac sign.

Anett Böszörményi is of Hungarian nationality. She was born to her father Zsolt Böszörményi and her mother Anikó Baláti Böszörményi. Her father hails from Budapest, Hungary, and attended Harvard University. As for her mother, she attended and studied ELTE – Eötvös Loránd University. Her mother, now 54 years old, runs Anikó-Napsugár Home for the Elderly which she started in May of 2002.

Anett’s parents celebrated their 31st anniversary in December of 2020.

More about her family: Anett has a younger brother named Krisi turned 14 in May of 2021. She is everything a big sister should be for a brother. The Böszörményi siblings love each other dearly.

Based on her Facebook, her other family members include Krupiász Anita (cousin) and Ilona Böszörményi Tiborné (grandmother).

Anett Böszörményi is on Instagram (@bosziike) with 16.5k followers as of July 2021. She earned a total of 16.5k followers for her video. She is also on Facebook with 614 followers and over 1.1k friends and posts on the platform frequently.

Anett keeps details on her education to herself. So, we don’t have any details on her academic qualifications. But, talking about her job, Anett Böszörményi was District Manager at Anikó Sunshine Care Home, her mom’s business since 2016. According to her Facebook, she still works there.

Anett also promotes another business named INNOWALL, home decor on her social media. Apparently, her family owns both of the businesses. However, Meaww.com noted that Anett is a renowned chef. She reportedly gained more notability after competing in a cooking show Konyhafonok, back in 2018.

Besides her regular job, Anett is also a lawn tennis player who shares snaps from her game on her social media.

Anett Böszörményi And Marton Fucsovics first appeared together in August of 2016 on IG. So, they might’ve been dating for almost 5 years as of 2021. They made frequent appearances on each other’s social media regularly.

For their fourth anniversary, Anett and Marton spent quality time together in Spirit Hotel Thermal Spa. She captured moments from the day and posted them on her IG. There she wrote: “Cheers to 4 years 🥂❤️” 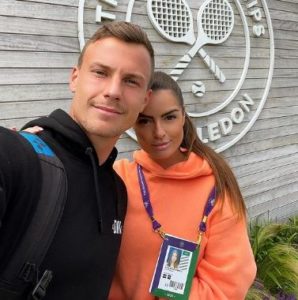 Anett and her tennis player boyfriend Marton Fucsovics for the championship in Wimbledon (Pic: Anett’s IG)

The couple got engaged in November of 2017. However, they haven’t married as of July 2021.

However, Anett was brought into the public radar when Boris Becker commented about Anett being a pretty lady. He had spotted Marton Fucsovics’s partner in the stands while he was taking on Novak Djokovic on Centre Court.

When Anett was flashed on the screen, Becker remarked: “They do say they have the most beautiful women in Hungary. I wouldn’t know that, but she’s certainly very pretty.” He also added jokingly: “If you’re a tennis player, it’s always good to have a partner called Anett.”

Becker faced backlash after that but the BBC defended three-time champion Becker, 53 – claiming that he had made a ‘light-hearted’ remark and did not intend to offend.

The comment came after his fellow commentator John McEnroe provoked anger earlier in the week by suggesting British teenager Emma Raducanu couldn’t handle the pressure at SW19. In the drama appeared Stephanie Hilborne, CEO of Women in Sport.
She condemned Becker’s remarks and stated: “The charity Women in Sport has worked for decades to change sporting culture, including to end the objectification of women. Then two men are comfortable talking about women in this way, never mind on live TV, it shows there is still more to do.”