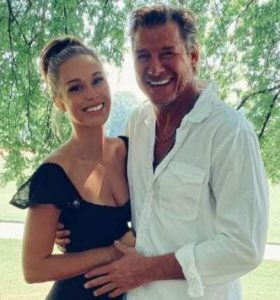 Kellee Merrell celebrates her birthday every year on June 7th. She reached the age of 33 in 2021. This makes her a Gemini and 23 years younger than her fiancé Ty Pennington who turned 56 in Oct. 2020.

Kellee Merrell is originally from Vancouver in British Columbia, Canada. In 2021, she was based in Georgia with her fiancé whose rise to fame began with his role as a carpenter on the TLC Trading Spaces (2000–2003). (Ty, then, continued to host the ABC reality series Extreme Makeover: Home Edition (2003–2012), which won him two Primetime Emmy Awards.)

So far, Kellee had not disclosed any of her early life and family background-related stories to the world.

Kellee Merrell stands to a height of 5’7” and allows Ty to tower over her in his 6′ — making them a very good-looking pair despite the big age difference.

From the fewer times, we saw her on Ty’s IG, she has golden-brown hair. She keeps her make-up minimal, defines her eyes with liner, and adds a slick of nude gloss to her pink lips.

Then, Kellee also could be spotted on her Pinterest @kelleemerrell sharing crafts ideas.

Basically, one can tell, Kellee is not a social media person. While her partner Ty shared some of his personal and more professional glimpses on platforms as such, Kellee stayed likes a social media ghost.

Less was understood about Kelle Merrell’s professional endeavors, at the time of this writing. Also, all we could collect about Kellee’s academic qualification is, she attended Arthur Meighen Public School.

PEOPLE exclusively confirmed she is a social media manager.

Then, we also learned, she has been part of Canada’s favorite design expert and style influencer, Janette Evan’s design team.

Back in March 2018, during the BEYOND FASHION interview, Janette herself had credited Kelle and the team as her inspiration to create things and move forward.

“My team inspires me so much, Patrick Delanty and Kellee Merrell believe in me, when sometimes I don’t. Their endless optimism is inspiring…”

Janette, the ubiquitous interior designer, and lifestyle expert, also credited Kellee as her makeup artist when Janette shared her trend-spotting savvy as Vitalize Magazine’s new Home Editor back at that point.

Kellee Merrell had less than an estimated $850K net worth (before July 2021).

So, we know, it was the “yes” for Ty Pennington.

Ty asked Kellee to be his wife over morning coffee on the dock of his home in Palm Coast, Florida. And Kellee of course accepted his “hand donning a teardrop-shaped stone.”

Following the engagement, Ty sat for an exclusive one on one with PEOPLE Magazine.

Loved-up, Ty shared — he had admired Kellee, a beautiful person inside and out, from afar for years.

Ty said, he never thought he would get married, but Kellee changed that.

“Luckily our paths finally crossed at the right time. It’s one of those things where you just feel happy being around a person. I never thought I would get married, but she changed that. Glad I waited for the one.”

Kellee met Ty while he was filming a TV show in Toronto and stayed connected over the years through mutual friends. They reconnected only in early 2020 and decided to quarantine together, during which their relationship bloomed even further.

They also purchased a 19th-century house together in Savannah, Georgia. As of late July in 2021 they were still renovating it into their dream home. About which, Ty’s rep had said, “they’re thrilled to be engaged and excited to begin their life together.”

In the meantime, as the wedding plans await, let us tell you, Ty was previously in a long-term relationship with Andrea Bock. They parted ways in 2009 but remained friends, said Ty.

Now, Catch Ty on the shows Ty Breaker and Battle on the Beach on HGTV.