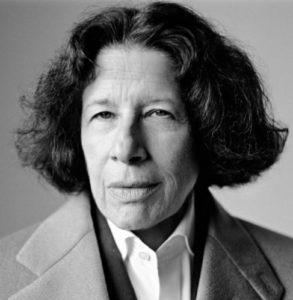 As Pretend It’s a City premiered on Netflix in January 2021, many people have shown interest in knowing about American author, speaker, and occasional actor Fran Lebowitz, who talked about New York City and other topics with her longtime friend and filmmaker Martin Scorsese in the new Netflix show.

Stick until the end of the article if you want to know about this famously heavy smoker. From her general wikis to dating life and net worth, this article has it all.

Fran developed an obsessive love for reading as a young girl. She looked very beautiful, had long black hair and dark black eyes. She was even considered a “sex symbol” during her youth. 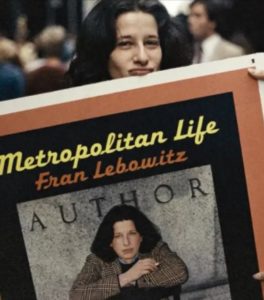 Though Fran Lebowitz spent a big chunk of her life in New York, she is originally from Morriston, New Jersey, and was born there.

Fran Lebowitz was born in a conservative family as a daughter of the World War II veteran, late Harold Lebowitz, and a Connecticut native, Ruth Lebowitz. Her father’s parents were immigrants.

She also has a sister Ellen, who owned Pearl’s Upholstered Furniture in New Jersey.

Fran Lebowitz is not available on Instagram as of this writing. Admittedly, she didn’t own a cell phone but knew everything that went on social media.

By 2021, Fran Lebowitz stacked over $2 million in net worth.

Fran began her career at age 21 as a columnist for Changes, a small magazine organization “about radical-chic politics and culture.” Leaving her job at Changes, she directed her attention to selling advertising space and writing movie reviews. She also worked as a columnist for Interview.

In 1978, Fran published her first major work, Metropolitan Life. The book was a collection of comedic essays, mostly from her job at Interview and Mademoiselle. The titles such as “A Few Words on a Few Words” and “Success Without College” became a huge hit.

The New Jersey native published another book Social Studies in 1981. In the book Fran explore subjects like films, teenagers, and room service in the book. Social Studies was followed by The Fran Lebowitz Reader in 1994.

As terrific a writer, she is, Fran is also a victim of “writer’s blockade.” To put everything into perspective, Fran’s last published book was Mr. Chas and Lisa Sue Meet the Pandas (1994).

Due to her writer’s block, Lebowitz has supported herself with film appearances and public speaking engagements. In 2010, Fran was featured in HBO‘s Public Speaking, a documentary from Martin Scorsese about Fran’s interviews and clips from her speaking sessions.

She also starred in Martin Scorsese’s 2013 movie The Wolf of Wall Street. Her new collaboration project, Pretend It’s a City, with Martin Scorsese is now live on Netflix.

Fran Lebowitz Partner, Is She Married Or Dating?

While the New York writer is popular for being vocal on American life and politics as filtered through New York city’s senses, not much is known about her love life.

That being said, the socialite was openly gay when she came to New York in the 70s.

“One of the reasons people our age came to New York if you were gay, was because you were gay. Now you can be gay anywhere,” Fran recalls to Martin Scorsese at some point in Pretend It’s a City.

When it came to sustaining a relationship with a romantic partner, Fran was not very good.

Talking to Interview magazine, she told, “I’m the world’s greatest daughter. I’m a great relative. I believe I’m a great friend. I’m a horrible girlfriend. I always was.” She also revealed that her longest relationship lasted only three years.

“I could not possibly be in a relationship for more than six days. But what I can’t be is monogamous. That tends to upset people,” Fran told to Interview. She further added: ‘When I was young, I liked the romance. But to me, romance is the opposite of domestic life. I just don’t want anyone in the apartment, not for longer than a few hours. Three or four hours, okay, fine. I just don’t want to hear someone else walking around.’

As of 2021, it seemed like Fran Lebowitz was neither married nor dating anyone and was busy forming her opinions on everything from Donald Trump to the democrats. Even if she was dating anyone, kudos to the Pretend It’s a City star for managing to her partner a secret.