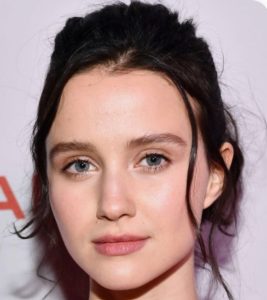 An American actress and ballet dancer, Julia Goldani Telles, popular for playing Sasha Torres in ABC family show Bunheads and Whitney Solloway on Showtime‘s show The Affair took on the role of Iris in her new TV show The Girlfriend Experience.

As talented as she is, Julia is stunningly beautiful too. That is why a lot of her fans are wanting to know if the young actress is dating anyone.

Find out about that in the article below. Also, get insights into her age, parents’ info, net worth, and boyfriend’s info.

Her Age: How Old Is Julia Goldani Telles?

Coming to Julia Goldani Telles’s age, the talented American actress turned 26 years old in 2021. Furthermore, she celebrates her birthday on the 18th of March every year. Going by her birthday, her zodiac sign is Pisces.

Julia Goldani Telles was born in Los Angeles, California, the United States to her parents, Edward Eric Telles (father) and Ana Maria Goldani (mother). At 2, Julia moved to Brazil and again moved back to the US at an age of 13.

Julia’s dad, Edward, is of Mexican origin and her mom is of Italian origin. Therefore, Julia’s ethnicity is mixed.

Julia’s mother, Ana, is an associate research professor at the University of Princeton according to her LinkedIn profile.

According to some reports, Susana, David, Daniel, Christopher, and Adam are either Julia Goldani Telles’s siblings or her cousins.

Julia Goldani Telles stands at an average height of 5 feet 7 inches and weighed no more than 54 kilograms. Furthermore, she looked incredibly beautiful in short black hair and bright blue eyes.

For an emerging actress, Julia actually has a massive social media reach. As of May 2021, she was available only on Instagram. Not only was she available, but she frequently posted too. Her Instagram account boasts a massive following of 67 thousand.

Per reports, Julia Goldani Telles’ overall net worth was reported to be around $750 thousand as of 2021.

Julia began her career as a ballet dancer at the young age of 5. At 13, she enrolled herself in Professional Children’s School in hopes of becoming a great ballet performer. Julia also trained at the School of American Ballet.

However, at 15, a case of tendonitis and labral tears in her hip area prevented her from practicing ballet for a year. To avoid depression, she decided to take a drama class. Ever since she has never turned her heads toward ballet dance.

Her first acting role came in 2012 in ABC‘s comedy-drama Bunheads as Sasha Torres. Her next big role came in the Showtime TV drama, The Affair.

In her 2021 TV show The Girlfriend Experience, Julia played Iris, a neuroscience major who drops out of college and moves to London to realize that participation in the girlfriend experience gives her a slight edge in the world of tech.

Other Julia’s acting credits include Slender Man, Nurse Jackie, The Carrie Diaries, The Wind, Blue Bloods, among others.

Julia Goldani Telles Boyfriend: Is She Dating Anyone?

The Girlfriend Experience star, Julia Goldani Telles kept details about her dating life private for what seemed like an abnormally long time. However, in 2019, some reports claiming Alex Fitzalan to be Julia’s boyfriend surfaced on the Internet.

The Australian actor, Alex is popular for starring in the hit Netflix show The Society as Harry Bingham. Furthermore, Alex co-starred with Julia in the 2018 horror movie, Slender Man.

While it was normal until the pair were only spotted at different promotional events for the film, people began to suspect if they were a little more than just friends after people spotted Alex in Julia’s Valentine’s Day post.

Unfortunately, neither Julia nor Alex ever bothered to clarify the dating rumors.

As of May 2021, it seemed like the relationship, if there was any, between Julia and Alex appeared to be already over. The Valentine’s Day post, too, had since been deleted from The Girlfriend Experience star‘s Instagram handle.

With that being said, the question of whether Julia is dating anyone still lingers. As of this writing, we did not have enough evidence to answer that question.