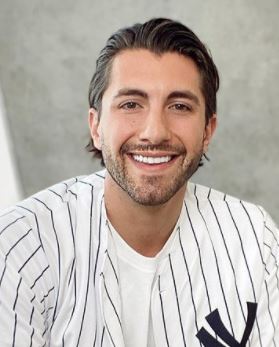 Jason Tartick was a contestant on The Bachelorette season 14 who got eliminated in the 9th week.

However, Jason’s popularity comes attached with the name Kaitlyn Bristowe, gaining the spotlight as the fan-favorite couple on Bachelor Nation. And though the duo found love through the show, it wasn’t on the screen.

Here is everything you need to know about him over this Jason Tartick wiki.

Corresponding to his birthday, Jason is of Scorpio zodiac.

As for his hobby, apart from dancing, Jason loved playing ice hockey. His team once participated in the Stanley Cup.

Also, Jason is an activist.

In October 2020, he took it to his Instagram to make the world aware that “there have been 46,782 wildfires that have burned 8,542,022 acres just this year.” He urged his fans to participate in the “Aspiration”, a movement to plant over 100 million trees globally.

Furthermore, Jason along with Kaitlyn to launch a limited collection, called “Re/Dew. Re/Dew”. They sold different hoodies & scrunchie bundles, a portion of which would go towards the Children’s Defense Fund.

Later, Jason himself confirmed that he’s proud to be from Buffalo but lived in Seattle.

Coming from a family of five, Jason was raised alongside his two siblings. The Tartick family seemed close to each other and often spent vacations together.

His brother, Steven Tartick was into theater, tech, design and was the Executive Creative Director at RPM. Also, Steven married his long-time boyfriend, Billy Rosen.

Jason considered Steven and his husband as his “role models.”

As for his parents, Jason was born to; father Gary and mother Dale. They were spotted a few times over his Instagram.

Mentioning his distinct features, Jason is a handsome man with browns eyes and a triangular face. Also, fans were crazy about his dreamy hair and smile.

Jason Tartick defines himself as “Consultant, Speaker & Investor”. He is the founder of Restart, a page that provided “information, inspiration, and life hacks” via YouTube tutorials.

Because of his innovative skills, Jason also made it to the cover of Entrepreneur Mindset magazine in summer 2020.

Before this, Jason had a job as a banker. He worked as the “Vice president – Senior Middle Market Banker” for Key Corporate & Commercial Bank for almost 10 years. Also, he flaunts his achievement as – “executed over $100 million of lending to the companies which all earned over $20 million in revenue.”

And not to mention, his participation on The Bachelorette and helping judge the performances on Listen To Your Heart.

From us – Bennett Jordan Wiki: Net Worth, Height, Ex-Fiancee, Family

The duo first met in October 2018 during a recording of Kaitlyn’s podcast. And a few months in of knowing one another, they were already head over heels for their other half.

Furthermore, they moved in together in Nashville, Tennessee, apartment and adopted two dogs.

In July 2019, Jason shared to E! Online that at the pace they were moving, Kaitlyn would want a proposal in almost a year. To which, Kaitlyn replied,

“I don’t have an expectation. I don’t expect anything.”

But fast forward to over a year from then, in Nov 2020, before Dancing With The Stars season 29 finale, Kaitlyn joked that Jason may pop the question if she won the show. And now that she stood victorious, Kaitlyn shared “Yeah, maybe,” the proposal was coming.

And it did. In May 2021, Jason proposed to Kaitlyn in Nashville, Tennessee. He popped the big question during the filming of the Off the Vine podcast. According to Kaitlyn, the proposal was everything. What’s more, Paris Jewellers supplied the oval-shaped 5.09-carat engagement ring.

Little info on Jason’s fiancee, Kaitlyn: She previously dated the  Bachelor star, Shawn Booth. They were engaged in 2015 during The Bachelorette season 11 and split 3 years later in November 2018.