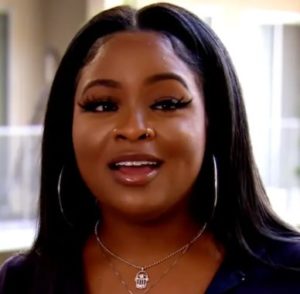 Since the experts at MAFS believe everyone deserves at least one chance at love, this series helps find a possible match for the contestants within the cast members. Unlike the original show which sets up people for a marriage to an absolute stranger, Married At First Sight: Unmatchables tries to match two people who are very opposite to each other in the way they conduct themselves and their life.

Evan-Nicole Williams is one of the contestants in the show. She was set up, by the experts, for a blind date to another contestant named Clyde Jackson in the 3rd episode of the show, which premiered on May 5, 2021.

According to Ashley’s Reality Roundup, Evan-Nicole Williams was 24 years of age in 2021. A glance through her Instagram reveals that the hairdresser celebrates her birthday on December 12.

On December 12, 2020, Evan-Nicole thanked her best friend Prescillia for giving her the most thoughtful gift for her 24th birthday. A December 12th birthday gives Evan-Nicole a Sagittarius zodiac sign.

To talk about Evan-Nicole’s family, well her mother’s name is Sherita Cherry. Sherita, who is a business architect, had a big role in making her daughter’s career as an entrepreneur successful. According to Sherita’s FB Intro, she worked at Genesis Hair Art.

Evan-Nicole’s father’s name is JD Williams. A motivational speaker, personal development expert, and a successful coach and mentor, JD is also an author of over 50 self-help books.

Evan-Nicole Williams stands at an average height of 5 feet 5 inches and weighs under 58 kilograms. Furthermore, she boasts appealing body measurements of 37-26-38 inches.

Before moving to her job and net worth, let’s start with her education. She went to Hampton University for education.

Her first job was at Foot Locker. She began her entrepreneurship journey at the early age of 17.

Presently, Evan-Nicole works as a hairstylist and salon owner. She sells luxury hair products through the Instagram handle of The Glam Affair Hair Company.

Evan-Nicole is also the owner of The Guru Shoppe. She started the business when she was only 15. You can check out the products and her merch by clicking here.

Evan-Nicole’s net worth was reported to be around $1 million as of 2021.

Are Evan-Nicole Williams And Clyde Jackson Still Together?

Evan-Nicole Williams was set up for a blind date with Clyde Jackson by relationship experts Dr. Viviana Coles and Pastor Calvin Roberson. Coming into the date, Evan-Nicole and Clyde lied on the opposite ends of a spectrum. However, the experts put these two unmatchable doing all kinds of makeovers to make them dateable.

As you may have already seen in the show, Evan-Nicole is one of the oddest contestants in the lot. Her successful career as a hairdresser has made her bossy in relationships. She is impatient and tends to interrogate men on their date.

As if that is already not a major red flag in dating, the 24-year-old Evan-Nicole is so busy in her work that she FaceTimes people–and eats full meals–sitting on the toilet to save her time.

Clyde, on the other hand, is a “clean freak.” In the books of a 30-year-old Business Development Executive, cleanliness should be the number 1 priority of every human being. Described as the lovable dork, Clyde’s obsession with cleanliness can scare a woman away.

Coming into the show, Clyde was looking for a woman whose house is so clean he could eat off her floor, which Evan-Nicole certainly is not.

As of May 2021, we do not know if Clyde and Evan-Nicole’s relationship took any start. Also, we don’t know if they were still together.

However, as Lifetime puts it “if Clyde can keep from cleaning himself out of the picture and Evan Nicole doesn’t put a foot in her mouth,” there’s a chance that they could make a great couple.