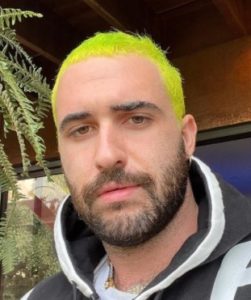 As 2020 drew to an end, it was time to thank all the things that made the horrible year less horrible.

While some people considered thanking social stars like Luke Millington Drake (famous for his Kiera Knightley impression), or Mary-Alice Farina, or Tabitha Brown (a TikTok sensation) first, the other group of people, without a second thought, wholeheartedly thanked Jordan Firstman, a quarantine comedian and a writer, first for his “Impressions” series on Instagram.

The California-based comedian rose to prominence in the coronavirus pandemic after his funny and relatable impression videos were successful to put a smile on thousands of people’s faces.

The Instagram star, who even got featured in a pop-culture website called The Cut, recieved a lot of hate after Diet Prada posted his racist and disturbing tweets from 2012.

Join us as we explain the story of Jordan’s offensive tweets from 2012. Also, get insights into Jordan’s general wikis, net worth, and dating life in the wiki-article below.

On December 23, 2020, Diet Prada dug up a string of since-deleted tweets of Jordan where he made fun of homeless people, black lives, and the Indian race.

Although nothing can be found on Jordan’s Twitter handle except a Spotify ad now, Jordan’s tweets from 2012 went viral on the Internet.

One of his tweets was “speaking of homeless, people..has anyone tried killing one?”. Another tweet was “RT if you are a strong black woman. I’m looking to hire someone to fight in my place when needed.”

Among the series of tweets was “I hate Indian people because at my last Dublin donuts they knew my name and order and at this one they don’t.”

Although some people like actress Jameela Jamil came to Jordan’s defense calling his tweets “satire,” the majority of people pointed out that such sensitive things should never be the subject of a joke in the comment section.

One user named modello9 wrote, “All the folks in here saying, “But it’s from 2012″ Ok, and? You don’t get to slip out from being held accountable for racism just because it was 8 years ago. People should have room to grow, sure. But people should also be held accountable. Period.”

The other user named @totesmckee wrote, “Also….jokes need to be funny. These are more just unfunny, mostly racist statements.” 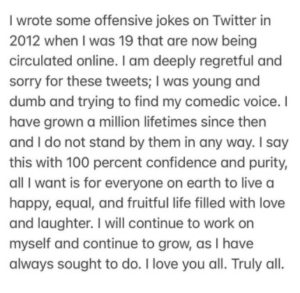 Jordan’s apology letter for the offensive tweets he made in 2012.

As soon as the tweets began taking the Internet by storm, Jordan wrote a lengthy apology letter on his Instagram which read: ‘I wrote some offensive jokes on Twitter in 2012 when I was 19 that is now being circulated online. I am deeply regretful and sorry for these tweets; I was young and dumb and trying to find my comedic voice. I have grown a million lifetimes since and I do not stand by them in any way. I say this with 100 percent confidence and purity, all I want is for everyone on earth to live a happy, equal, and fruitful life filled with love and laughter. I will continue to work on myself and continue to grow as I have always sought to do. I love you all. Truly all.’

Though Jordan has apologized to everyone for his racist tweets, only time will tell if Jordan will be forgiven or not.

The Internet sensation was reportedly born in 1992. Jordan Firstman celebrated his 28th birthday with his family and friends on July 8, 2020. Going by his birthdate, his zodiac sign is Cancer.

Jordan Firstman grew up in his hometown in Northport, Long Island. Not much information is available about his early life.

The incredible writer relocated to Los Angeles for his career leaving his family back in Long Island.

Jordan Firstman stands tall at a height of 5 feet 11 inches and weighs around 78 kilograms. His distinct features include black eyes, a hairy body, and ever-changing hair color.

The Long Island native embarked on his career in movies and televisions with his short movie called “The Disgusting.”

The year 2016 marked a good year for him as the film Call Your Father, a satirical short movie exploring the highs and the lows of an inter-generational gay couple, that Jordan wrote and starred in was nominated for Sundance Festival.

In 2017, Jordan and co-writer Charles Rogers wrote and produced Men Don’t Whisper, a comedic short movie where an emasculated gay couple try to regain their masculinity by seducing women.

In 2020, Jordan wrote an ode celebrating gay representation in the film which was sung by the Gay Men’s Choir of Los Angeles and Laura Dern at the Independent Spirit Awards.

By mid-2020, Jordan became an Internet sensation for his “Impressions” series on Instagram.

What’s more, Jordan Firstman’s net worth is reported to be around $600 thousand.

In an interview with Women’s Wear Daily, Jordan revealed how the breakup with his partner before the pandemic did not affect him as much as he thought it would. He told,

“I had spent the last four years working on two big creative projects, and they both fell apart in one week, with my relationship…I thought I was going to go into this deep, dark depression state. And instead, I just skyrocketed.”

The Disgustings actor also revealed that his boyfriend was not a partner for the heck of it, but instead, he used to help Jordan in his creative works.