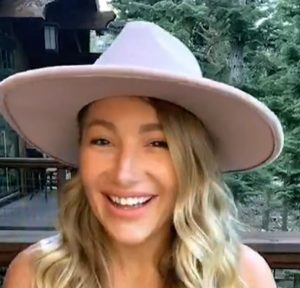 After shaking the Internet in 2019 with her engagement to her boyfriend, Conrad Louis, Hayley once again made headlines in 2020 after announcing her resignation from her label JLM Couture amid the ongoing legal battle with the organization.

In an emotional Instagram video that Hayley posted on her new Instagram account @allthatglittersonthegram on Instagram on December 22, 2020, she announced her resignation from her role as head designer at JLM Couture and also revealed that she has lost her rights to her own name and social media handles.

This article will not only cover the issues that rose between Hayley and JLM Couture but also delve into Hayley’s general wikis, net worth, and whole relationship timeline.

The incredible wedding dress designer’s birthday falls on every 18th of September. Going by her birthdate, her zodiac sign is Virgo.

Hayley Paige was born and brought up by her parents in the bay area of California. At the time of her birth and long after that, Hayley’s used to work as a doctor and her mom as an interior designer.

Hayley was drawn toward dress design since her childhood and she first learned about sewing from her grandmother.

For education, Hayley went to Cornell University in 2003 and graduated with a bachelor’s degree in Science, Fiber Science and Apparel Design in 2007.

The incredibly talented Hayley Paige boasts some amazing body measurements. She stands at a height of 5 Feet 3 inches and weighs 54 kilograms.

A graduate of Cornell University, Hayley Paige started her career as an Intern for Elle Magazine in 2006.

Until December 2020, Hayley was working at three different companies namely JLM Couture, Hayley Paige Inc, and Hearts on Fire. As of this writing, Hayley is not a part of JLM Couture anymore.

Through the Instagram video that Hayley posted on December 22, 2020, she let the people know about her resignation from JLM Couture.

Furthermore, Hayley also spoke about how JLM Couture took her rights to her own name, social media handles, and many more amid an ongoing legal battle with the organization.

According to JLM Couture, the problems first arose after Hayley shared videos that misrepresented the HP Brands through the TikTok account @misshayleypaige in November 2019.

Hayley Paige’s net worth is reported to be around $1 million.

After dating for only three months, Hayley Paige tied the wedding knot with her now-ex-husband Danny Wallis in a beautiful wedding ceremony at Lake Tahoe at the Saint Francis Church of Assisi on July 11, 2015. The wedding dress wizard dazzled in five dream dresses of her own design whereas her love went with the classic suit. 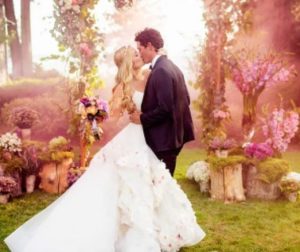 Hayley gets married to her now-ex-husband Danny Wallis.

On her 1st wedding anniversary, Hayley reflected on the first year of marriage and gushed about all the things the couple accomplished in their first year sitting down with JLM Couture.

Say Yes to the Dress star also raved about the adjustment her now-ex-husband had to make by setting up his Californian business in New York.

However, their marital bliss was short-lived as Hayley announced their divorce on their third wedding anniversary. The dress architect took to Instagram about the divorce on July 11, 2018.

Hayley wrote, “A few months back, I made the difficult but necessary decision to remove myself from a situation that wasn’t rights for me, namely my marriage.”

The pair don’t have any kids together.

Although the wedding dress designer had a hard time finding love after separation from her ex-husband Danny Wallis, the time was worth everything as Hayley found her soulmate–Conrad Louis, a fitness enthusiast and professional athlete.

Hayley, who was planning her second wedding in 2020, got engaged to her fiance Conrad on July 30, 2020. Hayley’s fiance pulled off a surprise engagement as he made Hayley think the pair were heading toward a promo shoot before he got down on one knee and proposed to her at Solenborg Estate in St. John. 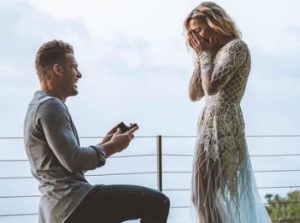 Hayley’s fiance Conrad proposes to her.

Conrad popped the question with a custom-ring made by the Boston based diamond jewelry designer Hearts On Fire. Hayley shared some of the stills from the big moment on her Instagram.

Hayley wrote, “I’ve found someone who refuses to let me be anything but myself 💍 @conradlouis you are the most thoughtful, creative, loving, and loyal man,” uploading the exact moment when Conrad proposed to her.