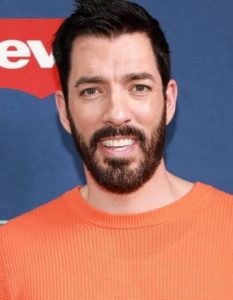 Instagramming a photo from their double date with Drew Scott and his wife Linda Phan, Jonathan and Zooey acknowledged their budding relationship. Per the post, the foursome visited the LA-based “Halloween Horror Nights” at Universal Studios.

In mid-September 2019, Jonathan Scott made headlines for igniting a romance with actress Zooey Deschanel.

The rumors of the HGTV star dating Zooey sparked after the pair were snapped entering an eatery in California. Eye witness accounts described their meal date as “happy and casual.” 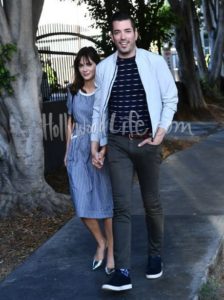 Per reports, Jonathan and his alleged girlfriend Zooey first met in August 2019 while filming an episode of James Corden’s Carpool Karaoke. Immediately drawn to each other, they hit it off from the get-go.

For Valentine’s Day, Jonathan and Zooey enjoyed a dinner date at the LA-based The Mayfair Supper Club at Bellagio. The reality star then shared the photos of them snuggling in a photo booth on Instagram.

A couple of days after the Valentine’s Day celebration, Jonathan alongside brother Drew Scott appeared on Entertainment Tonight. When quizzed if he and Zooey were ready to settle down, the “Property Brothers” star confessed to never being in a relationship like it before.

By then, fans of Jonathan and Zooey had put together a theory that pegged them to be an engaged couple already.

When the Coronavirus pandemic hit the US, they were isolating together. An elated Jonathan confined to PEOPLE that Zooey was the most perfect quarantine partner. What’s more, he took the moment to speak highly of the “500 Days Of Summer” actress’ culinary skills and cooking talents. Admittedly, she also doubled as his hairdresser.

The news of Jonathan Scott and Zooey Deschanel being an item came a week after the “New Girl” actress announced her separation from Jacob Pechenik. Married for four years, she and her director husband Jacob are parents to two children: Elise Otter and Charlie Wolf.

Jonathan and Kelsy ran into each other in early 2007. Summer that year, the pair tied the knot after becoming infatuated with each other.

Over time, the early marital bliss between the reality star and his ex-wife Kelsy wanned. The duo blamed hastiness to settle down behind the divorce, which got finalized in 2013.

His romance with Jacinta Kuznetsov, however, put out the gay suggestion for good.

Jonathan got introduced to Jacinta at a charity event in Fall 2015. Following a series of mishaps, the lovebirds eventually began dating.

The relationship, however, wasn’t meant to be. And in April 2018, the “Property Brothers” star and his girlfriend Jacinta called it quits.

Following the split, Jacinta built romantic ties – and eventually got engaged – with filmmaker Will Allen.

Jonathan Scott hails from a family full of show-biz personnel. His father James once worked as a stuntman/actor. Meanwhile, his older brother J.D. garners acting credits on several TV shows.

Jonathan Scott rose to prominence as one-half of the HGTV duo “Property Brothers.”

Working as a high-end realtor and reality star, Jonathan shows off $10 million in net worth. Also, he boasts six feet & two inches (195 cm) in height and 92 kgs in weight.