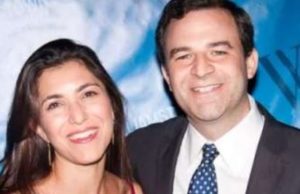 If you think you are not seeing enough of David Faber on CNBC, well you have got nothing to worry about. The reputed journalist served as a guest host on the popular TV game show Jeopardy! from August 2, 2021, to August 6, 2021, and naturally enough, people showed interest in knowing about his personal life, especially his wife, Jenny Harris.

David Faber has long been married to his wife of 21 years, Jenny, a business journalist and a television producer. In this Jenny Harris wiki, we will talk about Jenny and David’s relationship, their dating life, and how many kids do they have. The article also offers insights into Jenny’s age, family, and job.

Born in the year 1969, Jenny Harris was 51 years of age in August 2021. She celebrates her birthday on the 24th of October every year. Her zodiac sign is Scorpio.

Confronting cameras daily seems like a normal thing in Jenny Harris’s family. One of the two kids of her parents, Marie Masters (mother) and Jay Harris (father), Jenny has done enough to make her parents proud of her work.

Jenny’s mom, Marie Masters, played the role of Dr. Susan Stewart on the long-running CBS opera named As the World Turns. A winner of the Daytime Emmy Award for Outstanding Drama Series Writing Team, Jenny’s mom has also acted in Love of Life, One Life to Live, Kate and Allie, Law & Order, among others. Marie completed her education at Marian College, Indiana.

Jenny’s dad, Jay Harris, is a lawyer by profession. Jay previously worked as the counsel for a prominent law firm based in New York named Hall Dickler Kent Friedman & Wood. Jay was also a producer of Side Man, a Broadway production that ran from 1998 to 1999.

As for other family members, Jenny Harris has a twin brother named Jesse Harris. Grammy award-winning singer/songwriter, producer, and guitarist Jesse has already worked with artists such as Melody Gardot, Norah Jones, Madeleine Peyroux, Lizz Wright, and Nikki Yanofsky. A graduate of Cornell University, Jesse earned a Grammy Award for Song of the Year the song “Don’t Know Why.”

Jenny Harris stands a little over 5 feet 7 inches in terms of height and weighs no more than 60 kilograms. Her distinctive characteristics would be her brown eyes and hair.

Like her husband, Jenny Harris also works in the media field.

In 2021, Jenny served Fox Business by working as an executive producer in one of their programs called Lou Dobbs Tonight. However, the show was canceled on February 21 after Dobbs and the network had to face a multibillion-dollar lawsuit.

In the past, Jenny has already worked as the executive producer on a CNN show named Moneyline News House.

Over time, Jenny has also written articles for news magazines such as Nature, Archives of Disease in Childhood, and Reuters.

Before moving ahead to talk about Jenny Harris and David Faber’s married life, let’s talk a few things about the star of the CNBC network, David Faber.

A graduate of Tufts University, David started working for CNBC only in 1993. In 2021, David was one of the co-hosts of the hit financial program, Squawk on the Street.

Furthermore, David also hosts CNBC‘s monthly program, Business Nation. So far, David has authored three books, namely And Then the Roof Caved In, The Faber Report, and House of Cards: The Origins of the Collapse.

While we know a lot about Jenny and David’s life post marriage, the stories about their dating life still seem to be missing from the Internet.

As per some reports, Jenny and David shares two kids. Though one of the kids is believed to be a son and the other to be a daughter, neither Jenny nor David has ever spoken about their children publicly.

However, the whole Faber family once showed up as a full family during David’s 25 years celebration at CNBC.