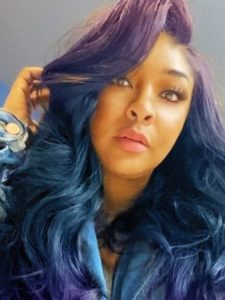 In March 2020, Rapper Da Brat confirmed she was in a new relationship. The legendary Hip Hop artist is known for collaborating with artists like Mariah Carey, Missy Elliot, and several notable others.

She was dating a female entrepreneur named Jesseca Dupart AKA BB Judy. With a multi-million dollar business, she has a huge following in her social-medias. And she is leveraging off of that to build her business.

Jesseca Dupart was born on 12 February 1982. She completed 38 years of age while celebrating her birthday in February of 2020. As per the birth month of Jesseca, she is an Aquarius by zodiac sign.

Jesseca Dupart was born to Jesse Anthony Dupart, her realtor father who had also briefly worked in Town Hall with the mayor, and her mother, Evelyn Dupart in New Orleans, the United States. She was close to her parents.

Her father, whom she loved and respected very much passed away at the age of 72, on the 13th of January in 2011. The congestive heart failure taking his life, which Jesseca took hard.

Jesseca Dupart is an established entrepreneur. But before starting her own business, she had worked as a makeup artist for several years. As per her unverified Linkedin account, Jesseca had worked in RoJes Barber Shop & RoJes Beauty Salon. She continued her job there for 6 years and 3 months.

Following that, she developed the courage to branch out and planned and decided to start her product line of hair and makeup.

In July of 2013, Jesseca through her Instagram account broke the news of her going solo. She posted a pic with a caption that she was scared but she has decided to set up a new business called Kaleidoscope Hair Studio.

It took everything from her, her life savings, time, and undivided attention. And now seven years later, Jesseca has successfully built a multi-million dollar business.

Jesseca’s success story was featured on several national and international news portals. Google celebrated her for building a business and her contribution to New Orleans.

On 20 May 2019, Jesseca received the key to the city of New Orleans from the mayor. As for the net worth, she is bagging millions with ease. In 2015, she got her self a Bently during the time of Christmas. Plus, she owns a sizable house that is yet to be made public.

In addition to that, her philanthropy has no boundaries.

She has donated money to Bardell Foundation for Breast Cancer. On the day of Christmas, she even successfully listed the name of her company in the Guinness Book Of World Record by giving away the largest number of gifts in a day.

Jesseca Dupart stands at a moderate height of 5 feet 3 inches (1.60 meters). She is flexing her measurements while modeling for her product or a different product line.

At one point, Jesseca Dupart weighed 234 lbs. By September 2018, she was weighing 204 lbs and aiming for 190 lbs. With the help from the diet coach Candace Brisco and waist garments designer PREMADONNA, Jesseca achieved the milestone. Contrary to rumors, she didn’t go under the knife for weight loss transformation. Thus, there weren’t any before surgery pictures.

On 27th March Of 2020, news of Jesseca Dupart getting cozy with Da Brat made the news. The two were seen mingling with each other. 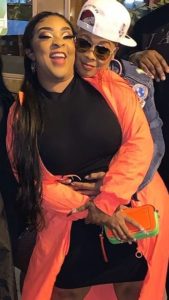 On 11 March 2020, she had hinted at her new relationship with Da Brat with a tweet that read,

“So boom imagine you and your significant other are music lovers right.”

The couple had allegedly started dating each other in early 2020. And one of Jesseca’s Instagram posts denoted that Da Brat had already popped the big question to her in February 2020.

Jesseca confirmed saying Yes, and showcased the big rock in her Instagram handle. But she had never revealed who she was engaged to.

A day before the relationship went viral, Jesseca had posted the pictures of the pair on her Instagram account. On the same day, she gifted Da Brat with a new car which was parked inside her garage in front of her house.

On 26 March 2020, she posted her reaction on her Instagram with a caption,

“But WE BE IN PUBLIC 🤣🤣 why is y’all hiding to get footage. My better half , my forever , my twin flame.”

The relationship part of Jesseca Dupart has been the hardest part of her life. When she was in high school, she was impregnated three times. During that time, she even had a miscarriage with a twin. And this was all before when she was around 18 years old.

From her previous relationship, Jesseca has three kids: two sons, Byron Jr. and Jay, and a daughter named Deja Dupart.

A year before, in March 2019, she was dating her then-boyfriend Denzel Coz, a traveling trainer. But the two parted ways with a particular reason for the split.

Before her relationship with Da Brat, everyone thought Jessica Dupart was straight. She even has kids with her ex-husbands.

But with this thriving relationship, we don’t know for sure. She could be a lesbian or a bi-sexual.