Jay Dukes is best known as an actor and stand-up comedian who is starring in OWN’s Put A Ring On It. He is appearing on the show to discover his relationship with his partner LaRhonda Mabry. Learn more about him with this Jay Dukes Wiki.

More From Us: Eric Weems Bio: Put A Ring On It, Net Worth, Wife

Jay Dukes [Put A Ring On It] Age

On 8 December, Jay Dukes receives birthday wishes from his family and friends. However, he never shared details on his precise age. But, calculating the age of his sister and brother, he has to be more than 33 years old. His birthday owned him Sagittarius as his zodiac sign.

Jay Dukes [Put A Ring On It] Family

Jay Dukes was born to his father Marshall Dukes and his mother Beverly Richards in his hometown of Spartanburg, South Carolina, the United States.

Besides a few Instagram posts, almost no details surfaced on his father. As for his mother, Beverly attended Dorman High School and earned her bachelor’s degree from Spartanburg Community College. Moreover, she worked at Spartanburg School District 7.

Coming to details on his siblings; Jay has a sister named Joann Dukes Bruton, and a brother named Jabari Dukes.

Jay Dukes stands tall at a height of 5 feet 6 inches (1.67 meters). Moreover, he weighed about 74 kilograms (163 lbs). He is often complimented for being the spitting image of his mother.

Coming to social media reach, Jay Dukes is on Instagram with 17.8k followers as of 27th June 2021. He posted a total of 448 followers. His Twitter profile @jaydukes1911 with 8856 followers with 62.5k tweets. Furthermore, he is also on Facebook where he is friends with 4.6k people as of this writing.

More From Us: Stan Smith Wiki: Love After Lockup, Age, Net Worth, Wife

Jay Dukes [Put A Ring On It] Job

Jay Dukes is an American actor and comedic host. He initiated a career in the entertainment industry as a highly sought-after MC for hundreds of major college events. He also opened up for The Legendary Patti Labelle ad co-hosted Omega Psi Phi’s 81st Grand Conclave step show with Rickey Smiley.

The actor trained in improv, stand-up, and a gift of being naturally entertaining. As an actor, he performed in several short films such as Wounds of Time as Gerald, Dear Carol as Arthur, Franklin University as Homeboy, and set to appear on Hazard as Kevin and Tell Me It’s Real as Tyrell.

As a producer, Jay has also received two credits in total for Wounds of Time and Tell Me It’s Real.

He is also the CEO of Aux Cord Wars, LLC. The company specialized in hosting and executing college tours. He served 20-30 colleges event as a platform to inspire and uplift the next generation. Meanwhile, he has an estimated net worth of $150 thousand.

Coming to his academic qualifications, after attending Dorman High like his brother, Jay attended Claflin University to earn his bachelor’s degree in Mass Communication.

Jay Dukes And LaRhonda Mabry: Put A Ring On It, Still Together?

The North Carolina native, Jay Dukes was at least in one relationship in the past. From that relationship he had a son named Jay Jr. However, he never revealed details on his baby mother. But, in this section, we will focus on the relationship details of Jay and LaRhonda in particular.

As of 2021, the North Carolina native had been seeing her girl for almost three years. LaRhonda made her debut on Jay’s IG in February of 2019. They spent their first valentine’s day together in the same month.

They have been happily in a relationship but, Jay has doubts about rushing it to take the next big step in their relationship. In this relationship, LaRhonda makes the big bucks which made Jay a little insecure about his financial standpoint.

So, Jay would want to postpone all the plans about getting engaged and married. 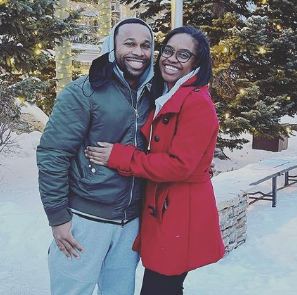 LaRhonda and her boyfriend Jay Dukes together in February of 2021 (Pic: LaRhonda’s IG)

The couple debuted their career as a reality star in 2021 starring in Put A Ring On It. They will be dating someone else in the show besides their partner to learn more about the current situation of their relationship. This is the second season of the show, and they are appearing with another two couples.

Talking about LaRhonda, she works as a distribution engineer. Based on their social media posts, Jay and LaRhonda are still together and deeply in love with each other.