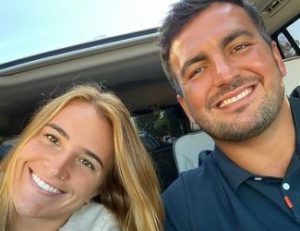 In Aug 2021, Sabrina Ionescu went “Instagram official” with her boyfriend, Hroniss Grasu. With the limelight, Hroniss became a subject of public obsession.

In this Hroniss Grasu, find out facts about Sabrina Ionescu’s boyfriend including his job, Instagram, and ethnicity. What’s more, discover his age, net worth, and career.

Talking about his ethnicity, Hroniss possesses Romanian ancestry. Moreover, he is of American nationality. Los Angeles, California is his hometown.

Hroniss was born to his parents Steve and Mariana Grasu.

In 1982, Steve and Mariana left Romania for the United States, escaping the ruthless communist regime. The couple went on to open “Greco’s New York Pizza” on Hollywood Boulevard.

Back in Romania, Steve did some movie stuntwork. Meanwhile, Marian was a goaltender for Romania’s national handball team. Because both Steve and Romania were obsessed with soccer, they didn’t want to see Hroniss pursue football.

There is also a Twitter profile created in 2014 with the username @GrasuHroniss. However, the account hadn’t let out a tweet. Moreover, we couldn’t confirm if the profile belonged to Hroniss.

Sabrina Ionescu’s boyfriend, Hroniss is an NFL player. However, in March 2021, he became a free agent.

At the 2015 NFL Draft, Chicago Bears selected Hroniss as their 3rd round pick. In September 2018, Bears released him.

Shortly after, Hroniss joined Baltimore Ravens, only to be released a month later. Even shorter was his stint with Miami Dolphins with whom he stayed for mere 9 days.

In February 2019, Tennessee Titans signed Hroniss. The NFL outfit resigned and released him multiple times before eventually releasing him in December 2019.

Hroniss then was claimed off waivers by Baltimore Ravens in December 2019. 9 months later, the San Francisco 49ers signed him. He would stay with the NFL outfit until March 2021.

At the University of Oregon, Hroniss was majoring in General Social Science. Before college, he had attended Crespi HS where Jeremiah Ross was his coach.

According to Sportac.com, Hroniss earned $910,000 in salary in 2020 from his contract with the San Francisco 49ers.

Sabrina Ionescu’s boyfriend, Hroniss Grasu, according to online sources, has a net worth of around $2 million.

On his 30th birthday, Sabrina Ionescu introduced Hroniss as her boyfriend via Instagram. Sharing multiple photos of them, Sabrina wrote:

“30• Happy Birthday to my person! Always smiling with you🤍 #HG”

The rumblings about Hroniss and Sabrina’s relationship began before Aug 2021. Fans also seemed to like the fact that both Sabrina and Hroniss are athletes of Romanian descent.

To those in the dark: Sabrina Ionescu is a WNBA player. Born in 1997, she attended the University Of Oregon. Sabrina is the daughter of Dan Ionescu. What’s more, she measures 5’11” in height.