How Did Melissa Fumero Meet Her Husband, David Fumero? 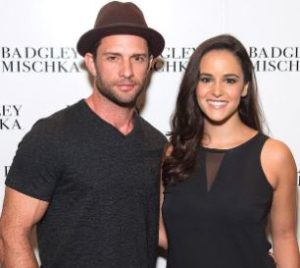 “He was like this speeding train that I felt like I just jumped on and held on as best as I could until like my contract was up.”

This is how Melissa Fumero, the actress who plays Amy Santiago in Brooklyn Nine-Nine, describes how she met and got together with her husband, David Fumero. There is a sense of co-incidence followed by strength of will in what she says, like the tale of two birds who meet because of the trends of the winds but do not leave each other no matter how fiercely the very winds try to separate them.

How did It begin?

Melissa Fumero was actually 13 years of age when she first saw her future husband, David Fumero. He was 24, working as a model, and had landed what was a massive gig for him. He was a model in Mariah Carey’s music video of the song Honey. 13-year-old Melissa saw him on television, on the MTV broadcast of the song. David appears in the last forty seconds of the video when the song is pretty much over and sweeps Mariah Carey off her feet. To Mellisa, that was the best part of the song, when the hot guy (and David was a very good-looking guy) appears.

“I would get so mad at MTV,” says Melissa, “when they would cut the video short. Remember they would do that? The credits would come up and you’d be like there is still 20 seconds left to the song. There is still the hot guy at the end of the video.” Melissa gets comically aggressive when she says that, and the childish passion that she wants to and does evoke is uncanny.

Read Also – Is Naruto The Best Anime Ever?

How did It happen?

When she actually met her future husband David Fumero, Melissa Fumero was an adult and working in One Life to Live, a soap opera. David had been on-and-off the show and at the time had returned for a three-month stint. At first, Melissa did not realize he was her childhood crush and in fact, had a rule of not dating any actors. She had previous relationships with pretentious, self-absorbed actors, who talked too much about themselves. Melissa also accepts having a tad-bit of prejudice against the hot guys for being shallow and being too arrogant. She thought he was “one of those…who thinks he can whoever he wants” and that was a no for her.

It was her friends, a circle of tight-knit friends who otherwise kept out of each other’s businesses, who convinced her to date David. David made a very good first impression on Melissa’s friends. Melissa recreates an abridged version of the conversation she had with her friends.

“Why aren’t you going out with him?”

“’Cause he is really good looking.”

“You’re an idiot…He is really nice.”

“Have you actually talked to him?”

Melissa makes animated faces (shocked judgemental faces for her friends, screwed-up, idiotic faces for herself) while recreating the conversation. She is mocking her own ill-judgment. It is the kind of self-mockery made from the vantage point of the future when the deed is done and the lesson is learned.

Melissa started to date David after her friends convinced her. David turned out to be a really nice guy and, as she found out about two months after starting to date, that he was the guy she had a crush on since she was thirteen.

And Now: David and Melissa Fumero

Melissa has been married to David for almost 14 years now, and they have been together for over 20 years. “I have my friends to thank for my happiness,” says Melissa with a genuine smile of gratitude on her face.

David and Melissa Fumero have two sons. Their eldest, Enzo, was born in 2016, two weeks after Melissa finished the shooting of the third season of Brooklyn Nine-Nine. Fans of the show might remember the fully pregnant Melissa Fumero acting as a non-pregnant cop pretending to be a pregnant criminal to infiltrate a prison. It sounds complicated on paper and must have been terrifyingly hard for an eight-month pregnant Melissa, but she pulled it off in style and the episode, called Maximum Security, was one of the best of the show.

Brooklyn Nine-Nine has had a fantastic run for seven seasons and the eighth one is airing right now. Melissa Fumero has been reached thousands of fans as the incomparable Amy Santiago. David, on the other hand, has been a part of a crime drama called Power. Their second child, Axel, was born in 2020, and the family of four lives in LA.

And More to Read – Did Pete Davidson’s Father Really Die In The 9/11 Attack? 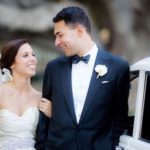 3 Replies to “How Did Melissa Fumero Meet Her Husband, David Fumero?”