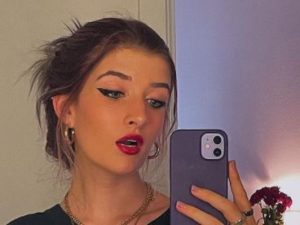 Sam Sheen is the daughter of Charlie Sheen.

In this Sam Sheen Bio, read about Charlie Sheen’s daughter’s boyfriend, net worth, and, height. What’s more, discover her TikTok, Instagram, and age.

While Sam’s father doesn’t need an intro, her mother is Denise Richards. Sam’s parents separated in 2016 after 4 years of marriage.

Beyond her parents, Sam Sheen has a year younger sister named Lola in her family. Meanwhile, Cassandra Estevez, Bob Sheen, and Max Sheen are her half-siblings.

In 2021, Sam made headlines after claiming that she is about finally getting to move out of her mother’s “abusive household”. She made the allegations over a video on TikTok that she later set to private.

Accompanying the TikTok video was a caption which read: “1 year ago today: trapped in an abusive household, hated me, would go days without eating or sleeping, insanely depressed, hated school, etc…”

In the next video, Sam shared a happier version of herself from the past with the caption:  “now: finally moved out of the hell house, had a spiritual awakening, own 2 cats, happily single, full of self-love, and dropped out of high school :).”

The series of videos arrived months after Sam had claimed that her mother, Denise Richards tried to kick her out of her home.

Responding to Sam’s allegations, an insider said: “Denise set normal rules that any parents would be setting. She’s a mom and a parent and there are rules. She didn’t want to follow the rules.”

“Charlie didn’t support implementing Denise’s rules. He has a different way of parenting and Sami decided to live with her dad. Denise loves her daughter very much and she’s saddened by the situation,” continued the said insider.

Via a rep, Charlie Sheen told Page Six: “Sam’s amazing. I love her and all my children unconditionally. We’re having a ball. GED here we come!”

By 13 Sept 2021, Sam Sheen enjoyed around 26K followers on her Instagram @samisheen.

Although yet to receive an official confirmation, Sam Sheen had a net worth of under $100 thousand in 2021.

Still a high school student, Sam relied on her parents to meet her day-to-day expenses. That said, she was amassing a fanbase with her ever-so-growing social media reach.

Sam’s father, Charlie Sheen owns a $10 million fortune. Her mother, Denise Richards should have $12 million in net worth.

In her September 2021 TikTok rant, Sam Sheen admitted she doesn’t have a boyfriend. She even used 2 phrases — “happily single, full of self-love” — to describe her relationship status at the time.

Sam’s Instagram is filled with picturesque photos of her taking selfies or posing with friends. None seem to depict anyone who might be boyfriend material.

Previous: Did Pete Davidson’s Father Really Die In The 9/11 Attack?
Next: How Did Melissa Fumero Meet Her Husband, David Fumero?