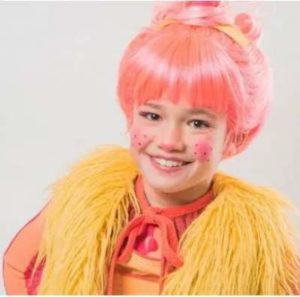 Up and coming young actress Amelia Minto is to take off on her very first televised acting role on Dr. Seuss’s The Grinch Musical Special.

Just like that, the holiday season in 2020, became extra special for Amelia, as she was got an opportunity to play innocent Cindy-Lou Who on the revamped version of the Broadway musical show, airing 8 pm on NBC on 10th December in 2020.

As you wait to watch young Amelia be a counterpart to your favorite Grinch, played none other than by Matthew Morrison from Glee, here’s everything you need to know about her.

Amelia Minto turned 10 years of age sometime before December in 2020.

But, because we were unaware of her precise birthday and we could reveal no further about her birthday and zodiac sign.

Young Amelia Minto is relatively new to the entertainment industry, which is why her family has well-kept the details of her background and upbringing out of the spotlight.

So, we could not yet spill the beans to you about her parents and siblings.

Because Amelia is from the U.K. we figured her nationality is English.

Amelia Minto was not active anywhere on Instagram, Facebook, or Twitter, as of the time of this writing. This is the reason, fans saw her on very rare occasions.

But her management company had praised her openly on social media for her quick success. The Stagebox had announced on Facebook on October 15 that Minto had “landed the lead role in a huge new musical movie.” Also, they wished her for a brighter future of more notable works on countless movies and TV shows, writing,

“Huge congratulations Amelia- we are all so proud of you and can’t wait to see you on the big screen!”

Amelia Minto joined Stagebox as a newcomer in the Development program. Ever since she has gone on to appear in Les Miserables, made her screen debut filming just after the lockdown in Lost Girls feature film. This way, she now goes on to embark on the screen lead role of Cindy-Lou for American and UK distribution.

As a Stagebox Management Client & Leeds Elite Member, Amelia made her professional acting debut with the stage production of Les Miserables. She played young Cosette and went on a 2019-2020 tour of the United Kingdom and Ireland, as part of the job.

Now, she awaited her new release i.e. the 2021 movie The Lost Girls. This would be her feature film debut where she was set to be portraying the role of young Wendy.

Chronicling the four generations of Darling women as they struggle in the aftermath of their adventures with Peter Pan in Neverland, this would be the first time fans were going to see Amelia sharing screens with the likes of Vanessa Redgrave and Julian Ovenden.

In the meantime, we think it’s a bit too soon to inspect her net worth.

Her Performance On The Grinch

Amelia Minto, as shown in a preview clip of the musical special The Grinch, donned a bright pink wig as she steps into character as Cindy-Lou Who.

Speaking softly on the video, one can recognize just how well she disguises her natural British accent.

In an interview with FabTV, published on YouTube on 3rd December 2020, she was softly yet excitedly spoke about her experience filming The Grinch.

Amelia expressed having a lot of fun in the theater-like atmosphere. “It’s such a joy and it’s such a really good feeling. You get a really good buzz from playing it. It’s almost like you’re on stage but it’s being filmed so it’s really good. It’s really cool.”

At the time, the young bud also assured that it was not too difficult of an adjustment despite her lack of experience of working on television.

To her audiences out there, she recommended The Grinch as a “heartwarming” and “lovable” story.

Also, let us tell you, one does not have to watch the original Grinch movie or one of the remakes to appreciate NBC’s The Grinch.