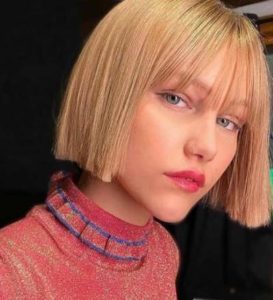 We all remember much younger Grace Vanderwaal from season 11 of America’s Got Talent. It was in the year 2016, and she was pronounced the winner of the season. Simon Cowell had said she could be the next Taylor Swift. But, did she became one?

Here’s everything you need to know about the Billboard magazine’s 21 Under 21 artist who years later has alarmed her fans with this new look she debuted on TikTok.

Who Is Grace Vanderwaal?

Born to her parents Tina and Dave VanderWaal, in Kansas City, Kansas, Grace turned 16 years of age in January 2020. Her zodiac sign is therefore Capricon.

She was three years old when she first started singing. Later, as she celebrated her eleventh birthday, she had already begun to write her own music. During the time, she asked her mother for a ukulele but her mother had refused, thinking she would never learn to play it. And, impressively, Grace had she bought one on her own using money from her 11th birthday. (We are glad she did!)

Grace is the youngest one in the family with a sister named Olivia and a brother named Jakob.

Grace is known for her distinctive vocals and ukulele skills. Before AGT happened, she used to post videos of her original songs and covers on YouTube and perform at open mic nights near her hometown of Suffern, New York.

And post the AGT win, she released her first EP, Perfectly Imperfect, a full-length album, Just the Beginning, and a second EP, Letters Vol 1, one after other.

Over the course, she also performed in many renowned concerts and platforms including the opening and closing of the 2017 Special Olympics World Winter Games in Austria.

Grace, who also made her acting debut as Susan “Stargirl” Caraway in the Disney+ Stargirl (2020), and is the youngest person ever to be included in Forbes’ 30 Under 30 Music List.

But, when asked to enlighten her fans on her future aspirations, she mentioned wanting to become an art therapist instead. Sometime in 2017, she had told The Post,

“Mental health is such an interesting thing, and it’s something I’ve wanted to [explore] for a while. The singing? I’m just going to see where it goes!”

Last we knew, she was home-schooled and enrolled in online courses for 7th grade after her AGT win. Also afterward she had attended public school.

More about her early on accomplishments, Grace is considered to one of the “Richest ‘America’s Got Talent’ Contestants of All Time” with a long-ago reported net worth of $2 million.

Grace made headlines on the said date simply because of her close-cropped pinkish hair.

Page Six headlined the story as “Grace VanderWaal of ‘AGT’ fame alarms fans with risqué look on TikTok” writing, the up and coming star appeared “bustier” in her oversize jacket.

She lip-synced to K. Flay’s “This Baby Don’t Cry” as she flashed her new hairstyle to her audience on TikTok. Then flooded several comments on the comment section much of which ranged from “she’s officially lost it” to “Is she ok?”, with one person even comparing her to 2016-era Miley Cyrus.

Most of these exclamations were no doubt because the world is used to knowing her as Grace who caught the judges’ attention on AGT performing her original song “I Don’t Know My Name.”

But, naturally, she has grown up plenty since. Her height only at the age of 16 was listed as 5′ 8″ ish.

Grace Vanderwaal Boyfriend: Who Is Eduardo Vanzin? His Age, Instagram

Grace VanderWaal, who appeared on “Good Morning America” and “Jimmy Kimmel Live!” in 2020, was rumored to be dating a boyfriend with the name Eduardo Vanzin.

However, at the time of this writing, there was no solid proof of it. Except for a photo of him with the guy shared by a fan account on September 17, 2019. 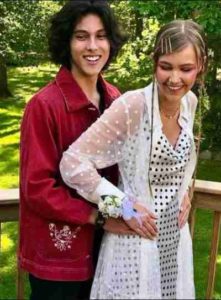 Also, Grace has not discussed any of this in her interviews or talk show appearances. And her social media too did not give away any of her secrets.

All we knew, at the time, was that they attended the same school. Also, they are of a similar age. Eduardo, in the picture, was not more than 18 years of age, as we write this.

Had he been found on social media, we would no doubt have a lot to tell.

0 Replies to “Grace Vanderwaal Boyfriend: Who Is Eduardo Vanzin?”