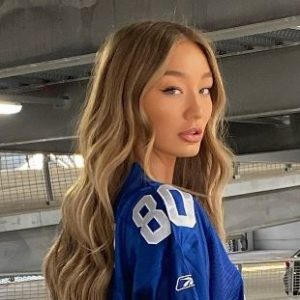 News broke in 2020 that Love Island star Michael Griffiths was in a new relationship and he was a lucky guy to be able to land a hotty. As reported, the girl he began dating was Britan’s Next Top Model contestant of 2016, Bethan Sowerby. Ever since their relationship went public, Bethan started drawing attention towards her.

So, scroll down to learn more about her life, career, family, and romantic life.

Bethan Sowerby celebrates her birthday every year on 9 October. She turned 24 years old while celebrating her birthday in 2020.

Per her date of birth, Bethan secured Libra as her zodiac sign.

Bethan Sowerby was born to her father Mathew Sowerby and her mother Jacky Sowerby in Oldham, Manchester, England. Talking about nationality, she and her family are British citizens.

More on Bethan’s family, Mathew is the owner of Clear Value Trading. He has been associated with the company since 2009. He also runs marathons occasionally and even won a medal in Abbott World Marathon Majors in 2019.

As for Jacky, she works at The Dog Pawlor.

While talking about siblings, Bethan grew up with a younger sister named Elidia Sowerby. Elidia is a gold medal-winning gymnast. She also worked at One88 Kitchen & Bar.

The Sowerby siblings carry a mixed heritage in their bloodline including Cantonese, Mexican, Belizean, and Irish.

According to Bethan Sowerby’s profile on starnow.com, she stands tall at the height of 5 feet 8 inches (1.72 meters). She doesn’t hesitate to show off her skin and has been leaving people stunned with natural 35-25-35 inches for measurements ever since she got her start.

Plus, the Brit model maintains her body weight of 54 kilograms (119 lbs) all thanks to the diet and exercise routine that she follows which she also shares on her social media accounts.

Furthermore, Bethan claimed never to be on fad diets. Whenever she goes out, she definitely has creamy pasta. She doesn’t stop herself from having pizza and pasta as she told Manchester Evening News.

Talking about social media reach, Bethan Sowerby has been able to accumulate an impressive number of followers. Her Instagram account flaunted a total of 131k followers at the time of penning this article.

Bethan is also no Facebook but hasn’t posted much for a very long time. And as for Twitter, she doesn’t seem to be on that as of this writing.

When Britain’s Next Top Model (BTNM) returned in January of 2016 after two-year hiatus, the show came with a new judge Abbey Clancy and 15 contestants. And among the 15 girls who competed for the modeling contract was Bethan Sowerby.

Bethan Sowerby wanted to become a model from an early age. Making Kate Moss and Gigi Hadid her role model, she decided to pursue a career in modeling. She was scouted while she worked in the TopShop.

Later, Bethan signed a contract with J’adore Models that have been representing her ever since.

Speaking about her experience in BTNM, she summed it up as life-changing, surreal, and of course fun. She secured the fourth position in the season that changed her life.

She was also placed with Miami with Next Model Management, walked in Miami Swim Week for Lounge Underwear, and also starred in Remington campaign shot in New York.

However, BTNM doesn’t qualify as Bethan’s on-screen debut. He also appeared as an extra on 8 Out Of 10 Cats, Waterloo Road, and 4 O’Clock Club.

Before modeling, Bethan worked in TopShop as a sales assistant in Trafford Center. At the time she was also attending college. With a hope to model for a fashion retailer rather than working on the floor, she decided to swap the career.

Besides that, Bethan also tried exploring success on YouTube. Her eponymous channel gathered 37.9k subscribers as of this writing. She posts vlogs and promotes products of the brands from her channel.

All together, Bethan Sowerby sits comfortably on a total net worth of $400 thousand.

Bethan Sowerby & Michael Griffiths: Dating, How Did They Meet?

In a 2016 interview with IN THE STYLE EDIT, Bethan Sowerby mentioned a boyfriend who gets jealous whenever she names Theo James as her celebrity crush.

At the time, she dated a guy named Alex Lightfoot. Though it remains unclear when the couple started dating each other but they go back as far as October of 2015. Alex appeared a few times on Bethan’s social media getting cozy with her for an Instagram post.

In December 2020, Bethan Sowerby made headlines with her relationship with Love Island star Michael Griffiths. The couple was spotted in Dubai getting ‘all over each other.’ By then, the couple had been seeing each other for at least a couple of weeks. Bethan and Michael confirmed their relationship in Dubai on a holiday.

As reported by Daily Mail, the couple first acquainted with each other in Liverpool, the hometown of Michael. Naturally, they didn’t get to converse much because of their tight schedule and travel, but, a chance arose for the two to know each other in early December 2020.

For the first date, the couple went to a luxury restaurant named Dash.

Before Bethan, the Love Island star dated Ellie Brown, a co-star in the show who he claimed ‘the one’. Michael also flirted towards Bethan on Instagram on her posts with a few flattering comments.