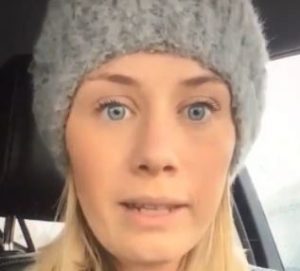 Just around Christmas 2020, Katie Sorenson posted a video over Instagram claiming that her children were “the targets of an attempted kidnap”. Over the viral clip that garnered over 4 million views, Katie alleged that a man and a woman approached them in the parking lot and attempted to get into her stroller before she cried for help.

Later, the accused couple were identified as Sadie and Eddie Martinez. However, due to a lack of “evidence or witnesses”, the investigation was closed by the police. Saddened by the situation, Sadie’s daughter Esaia Gonzalez spoke to the media about “guilty of being brown” and hinted that Katie was a racist.

Get to know more about Katie Sorenson as this wiki proceeds.

Who Is Katie Sorenson?

“Mom influencer.” This is how Katie Sorenson was known over the Internet. Though she was never in the spotlight before the alleged “attempted kidnapping”, Katie always seemed to talk about being a good mom over her Instagram @motherhoodessentials.

Even the (now-deleted) video she posted on Instagram was only to make other parents feel empowered to trust their instinct. In her worlds,

“I posted it simply to raise awareness.”

However, many social media users didn’t believe her story; instead, they accused her of faking the kidnapping story. But Katie remained fixed to her words and denied any accusations.

Also, the alleged Martinez couple seemed upset with the whole situation. As of Dec 2020, it wasn’t known if they would be pursuing charges against Katie. They shared that they were judged by the color of their skin.

Furthermore, they were now “uncomfortable going back to that store” and felt like they had a “target” on their back.

Details on her birthday weren’t shared. Thus, her zodiac couldn’t be established either.

Katie Sorenson aspired to be the best mom and often talked about her children. But other than that, she shared nothing about her family.

All we know is that she was living in Petaluma, California. Her hometown remained unknown as well.

Likewise, her maiden name wasn’t revealed. However, it was reported that she comes from a Mormon background.

Reportedly, Katie just had 6K followers before she posted the infamous video on Instagram. But within days she gained over 80K followers.

Trivia: Her video not only gained the attention of many online-moms but also rekindled the unfortunate incident of the 12-year-old girl Polly Klaas, who was abducted from her home and murdered in 1993. Polly’s father also commented about Katie’s case on KTVU’s nightly news broadcast.

Talking about her job, Katie Sorenson co-owned Finn Bibs (An Essential Oil Bib). Nothing more was shared other than that. So, her net worth could be established either.

Also, her education details were kept away from the light.

As of 2020, Katie Sorenson was married and had a husband.

Also, her husband was the first person she called as she was allegedly “being followed.” Katie shared that after she paid for her items at the Michaels craft store, she noticed she was being followed by an older Latino couple. She then immediately rushed to her car and called her husband to let him know that someone was following her.

Her two kids, a son and a daughter, that she feared for the safety of, were aged 4 and 1 respectively then.

Also, Katie shared that she was “terrified” as she walked to her car and wanted to “load kids in as quickly as possible.” The alleged couple walked towards her car and it appeared like the man was holding something in his hand. And as Katie yelled to someone nearby for help, the couple got in their car and drove off.