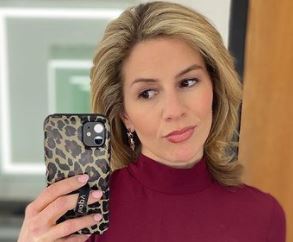 Gina Glaros is a journalist, anchor, and reporter. Moreover, she labels herself an Ice Cream Connoisseur.

This Gina Glaros wiki explores the beautiful media personality’s husband, age, parents. Plus, it highlights why she left WDRB-TV and her new job.

In the summer of 2020, Gina turned 33 years of age. What’s more, friends and family wish her a happy birthday on 13th July.

As for her zodiac sign, Gina is a Cancer.

Gina is a native of Ohio. However, she calls Indiana her hometown because she grew up there.

Hailing from a family of 5, Gina has a brother named Jonny Glaros. Gina was born only a few years before Jonny. Also, the Glaros call Greg and Cynthia Glaros their parents.

As of 2021, all three, Greg, Cynthia, and Jonny resided in Indiana.

Greg, according to his Facebook profile, is from Boardman, Ohio. For education, he attended Boardman High School and Business at Université d’État de Youngstown. He is the president of GG Ice Cream Inc.

Gina Glaros doesn’t appear any taller than 5 feet 6 inches in height. The blonde has a million-dollar smile.

As seen on her Instagram, for her admirable body, she regularly hits the gym.

Until 22nd March 2021, Gina enjoyed around 2.6 thousand followers on Instagram. Meanwhile, she had some 2.9 thousand more on Twitter.

As for Facebook, Gina garnered around 7.5 thousand followers on the platform.

In 2021, Gina Glaros announced she was leaving WDRB-TV. Back in 2016, she had joined the Fox affiliate.

During the pandemic, WDRB-TV had cancelled her segment.

Addressing her exit from WDRB-TV, Gina shared she was moving back to Indiana. Her new job in Indiana included helping her parents run their company GG Ice Cream Inc. Between 2002 and 2010, Gina worked for the company.

To highlight her eduation, Gina attended Indian University-Purdue University at Indianapolis between 2006 and 2010. From the same, she has a B.A. in Communication Studies and Journalism.

After Comcast, Gina worked at the WTHI-TV for 2 years and a month as a Reporter/Multi-Platform Journalist. She was then Reporter/Morning News Anchor for WANE-TV.

As of March 2021, Gina didn’t seem to have a boyfriend; much less a husband. She kept her romantic endavours private, away from the prying eyes.