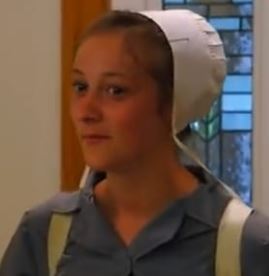 Rosanna Miller is the new face in season 6 of TLC’s Return to Amish. Her enthusiasm to experience the ‘English’ community made her want to escape the Amish community she grew up in. Before the show unfolds all the other details, scroll down this Rosanna Miller wiki to learn more about the newest addition to the Return to Amish.

Rosanna moved out of her Amish community along with her friend Maureen Byler. She was enthused to learn more about the ‘English’ world and we could get first-hand experience in TLC’s show Return to Amish.

So, Rosanna and Maureen moved from Punxsutawney, Philadelphia to Florida where Maureen had a grandma, Ada Byler, who lived. It was a new world, a new experience, and all of it is documented as a reality show. But the way the other casts were worried about Rosanna, she might’ve got indulged in the wrong side of the ‘English’ world.

Not only that, but even Ada was scolding her for doing things she wasn’t supposed to.

And as the trailer showed, Rosanna Miller was 18 years old at the time of the filming of the 6th season of Return To Amish.

Like her friend Maureen Byler who debuted on TLC’s reality show, Rosanna Miller also looked like she was still in her teens. But, it is just speculation made based on the appearance. No worries because either her or the TV network itself will give a brief overview in no time which will also include her age and her birthday.

Rosanna Miller was born to her parents in Punxsutawney, Philadelphia, the United States. Her mom and dad committed their life to the faith of the Amish community. Like ordinary parents, they also wished their daughter would follow the lifestyle which they opted for.

However, Rosanna’s curiosity caused her to stray off to experience new things in life. And now that she has escaped the community, she feared that her mom and dad would disown her for the choice she made.

Like her friend Maureen, Rosanna also never shared details about her family members including her siblings.

Rosanna Miller hailed from the community that shunned the technologies and their applicability in life. They avoided technological literacy and lived their whole life the way they were taught for years before by their ancestors.

So, Rosanna, who spent most of her life in that environment, also came with the same mindset. However, as she entered the “English” world, Rosanna launched profiles on both Instagram and Facebook.

Pointy nose, distinct cheekbones with rosy cheeks, dark hair, beautiful eyes, and beautiful face, Rosanna Miller is an undeniable beauty. She weighed a little above 56 kilograms (123 lbs) which is understandable as she looks like she has minimum body fat.

Would Rosanna dare to go through the painful process of removing teeth? We may never know as she might stick to some of the Amish tradition even if she left the community. But, removing teeth is an expensive ($20,000) procedure so she might not go through it in this season if she hasn’t already.

Though people from the Amish community abstained themselves from the English world, they are recognized for being the hardest working individuals. The teaser of the TLC’s showed her personality outside of the community.

Rosanna wasn’t scared to try new things after she moved in with Maureen Byler. She tried all the new things and things that could be tagged as the ones people do to have fun. But, to survive in the real world one requires a skill set, knowledge, and qualifications.

But Rosanna’s enthusiasm alone was enough to help her out of that community. She wanted to learn more about the world outside so she is here.

Whatever Rosanna did back in the community, might not be enough to sustain in the real world. In fact, we don’t know for sure whether she had a job or not when she was an Amish member. But, soon as she stepped out, Rosanna Miller debuted her career as TLC’s reality star.

Taking her good looks into consideration, Rosanna might as well try establishing a career as a model like Kate Stoltz. Or, she could become a social media celebrity that could help her earn attractive wealth with sponsored posts and endorsements.

Meanwhile, no information on her career or her education surfaced on the news outlets.

Rosanna Miller loves making new friends, ‘English’ friends to be more precise. She is learning their ways of living life and the way it looks she loved it. For Rosanna, one of the exciting things would be dating strangers from the ‘English’ community.

She was moving fast and doing everything fellow Amish were scared or worried to do. But, the trailer of the show didn’t share anything about her dating life.

However, Rosanna got into an argument with her friend Maureen who was dating Danny. Since Rosanna couldn’t take more of Maureen talking about Danny, she asked her friend to stop doing it.

But, Maureen understood the other way and accused Rosanna of being jealous of her boyfriend. The fight even got to the point that Rosanna accepted that she was on the verge of losing her friend.

As seen on “Return To Amish,” Rosanna Miller went on a date with the one named Nick. Nick, according to her, was a proper gentleman to her. However, she didn’t fancy him.

Later, Rosanna Miller began dating her boyfriend, Johnny Detweiler. She first appeared on Johnny’s Instagram in March 2021. The duo probably was in love before that.

For her part, Rosanna posted a photo of her holding Johnny’s hand on her Facebook in late April 2021. The post proved they were in love.