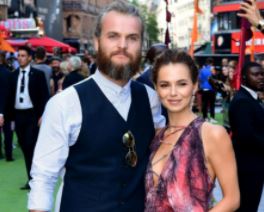 On Jan 8, 2021, Kara took it to her Instagram to announce the arrival of her second child with Marius. She wrote that she “couldn’t be more excited to start 2021 with this incredibly cool little man” and even extended her thanks to the hospital staff who helped with the delivery.

While congratulations were on the way for Kara, the good news also turned the fan’s attention toward her fiancé. Thus here we are, easing the queries on Kara Tointon’s future husband through this Marius Jensen wiki.

Marius Jensen was reportedly born on December 15, 1985. That made him 35 years of age in 2021; two years younger than his finacé Kara.

As per his birthday, Marius is of the Sagittarius zodiac.

Information on Marius Jensen’s family wasn’t available. As for his nationality, Marius is from Norway.

For hobbies, Marius loved cooking, playing cricket, surfing, rock climbing, skiing, and most of all, traveling. He has been to Rome, Austria, Italy, Austria, Brazil, Indonesia, and many parts of the UK.

Mentioning his distinct features, Marius has blue eyes, blond hair, and a square face. Also, he had long hair and a fuller beard. One might say, he was a younger and lighter version of the American actor, Jason Momoa.

As of Jan 2020, Marius Jensen had 1.9K followers over his Instagram “@thejensenmethod”. He mostly posted pictures of his adventures and a few work-related videos over there.

Marius Jensen is a Chiropractor. For those who are confused if Marius was a medical doctor, No! He is not. However, though Marius might not hold a medical degree, he claimed to have a DC (Doctor of Chiropractic) degree and was tagged as “Dr. Marius A Jensen” over his Facebook page.

Reportedly, Marius attended Angelo-Europen College of Chiropractic for MChiro, Chiropractic from 2003 to 2008. Also, he was a Certified Chiropractic Extremity Practitioner (CCEP).

Talking about his jobs, Marius was the owner and Chiropractor at Notting Hill Chiropractic for over twelve and a half years. Also, he was the director of The Jensen Method there. Furthermore, have you heard about the TELL app (the app where you can record and share stories)? Marius was also the founder and CEO of the app since April 2019.

Overall, Marius labeled his job as “Storytelling and bone fixing” over IG.

“He’s not an actor, he’s a chiropractor. That’s sort of how we met.”

After a year of publicly dating, the duo got engaged in 2018 and planned their wedding to be held in 2020. Unfortunately, due to the COVID-19 pandemic, the lovebirds couldn’t get married. Speaking about the matter,  Kara shared that she didn’t want to “rush” rather wanted to get married “in a celebratory way when we can enjoy it with family.” So, they might just tie the knot as soon as things settle down.

As for their plans, Kara revealed that the wedding might not be in the UK. They had decided to hold the ceremony in Marius’s hometown Norway in 2021

Talking about their kids, Marius and Kara share two kids. They welcomed their first child in November 2018 and the second one in January 2021.

Little info about Kara Tointon: She is an English actress, popular for her role in EastEnders, Mr. Selfridge, and The Halcyon. Before Marius, Kara dated EastEnders co-star Joe Swash ( from October 2008 – May 2010), and Strictly pro Artem Chigvintsev (from December 2010 – July 2014).