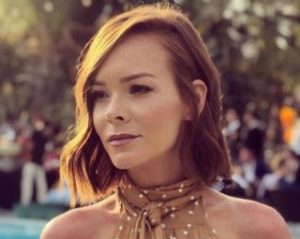 After the United States of Al’s trailer dropped in early 2021, it immediately sparked controversy as viewers believed that Adhir’s character (Afghan interpreter Awalmir, or Al) was pigeonholed — restrictions in drinking because of Al’s Muslim faith, people’s surprise when Al kisses everyone on the cheek as a greeting, and jokes about Afghanistan actually having things like WiFi. Moreover, Adhir is not Afghan.

So, while Adhir became the focal point for the movie’s critics, many fans also got interested in his personal life; especially his marriage life. Thus, here we are shedding light on Adhir’s wife over this Emily Wilson wiki.

Also, corresponding to her birthday, Emily is of the Gemini zodiac.

Emily Wilson’s parents, Bill and Karen Wilson were the coolest. According to Emily, her mother was the most “delightful human” she knew, and her father was the “best dad anyone could ask for”. 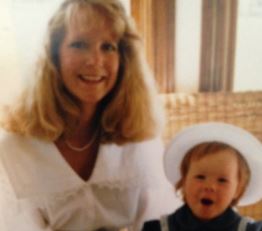 As for Emily’s siblings, she has a sister named Kristen Wilson who got engaged to Nick Ventura in July 2020.

Overall, the family was close to each other. Nick and Adhir, both were often included in the family pictures.

Coming to her ethnicity, Emily is Irish. She hails from Westminster, Colorado, and was married to the Durban, South Africa born, Adhir (who is Indian). This was also the reason fans criticized the United States of Al — Since ‘Al” was an Afghan character, an Indian portraying it didn’t sit well with many.

In 2021, Emily resided in Los Angeles with her husband.

Mentioning her distinct features, Emily has a triangular face, brown eyes, and loved to keep her hair just above her shoulder.

Most of her posts featured her family and a few show promotions. Also, her pomeranian cute little dog appeared over the post from time to time.

Like Adhir, Emily was in the movie industry as well. As an actress, she was credited to over 26 movies and TV shows by 2021. Listing some of the popular are:

Emily Wilson and Adhir Kalyan started dating in 2011 and after three years of togetherness, Adhir popped the question to Emily in May of 2014. And finally, on October 1st, 2016, the couple tied the knot at the Colony 29 resort in Palm Springs, CA.

Their wedding pictured by many guests and some even labeled it as an “impossible to top” ceremony. Over the pictures, the lovebirds were seen dancing, as Emily wore a tulle and leaf lace wedding dress, and Adhir wore a black suit.

The proud parents both took it to their IG, over the same day, to share the same pic of them holding their baby. The comments were filled with words of love, and congratulations for the new dad and mom. 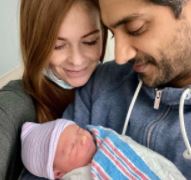 Emily Wilson with her husband, Adhir Kalyan, and their newborn, Mira (Source: Instagram)

Just in case you are here as a fan of Emily and don’t know who her husband is: Adhir Kalyan is an actor born and raised in Durban, South Africa, who moved to London to pursue an acting career. His first leading role was in the CW’s comedy series Aliens in America (2007), where he portrayed Raja. Since then, he has appeared on several shows like I Love Dick (2017), Second Chance (2016), and Rules of Engagement (2013).