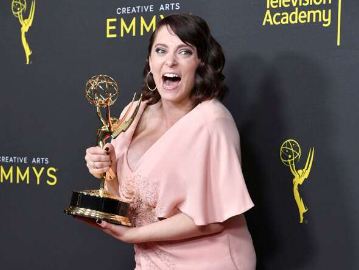 At the 2019 Creative Arts Emmys, Rachel Bloom hogged all the limelight. After bagging the best original music and lyrics category, she surprised reporters backstage by opening about being pregnant with her first child.

In her own words,

“I’m three months pregnant and I get to tell my child she was with me when this happened, which is pretty f–king cool…”

In the night that she announced being pregnant, Rachel took home her first Emmy for the record “Antidepressants Are So Not A Big Deal.” Adam Schlesinger and Jack Dolgen, her collaborators, were there to collect their respective trophy.

With the news of Rachel Bloom’s pregnancy, fans began to speculate who her baby father could be. Many seemed to have forgotten about the actress being a married woman.

Her husband Dan Gregor is a revered writer and most likely the father of her first baby. 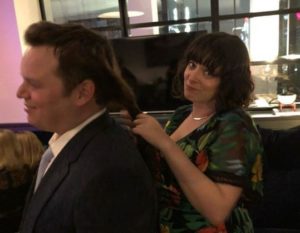 A native of Long Island, New York, Dan hails from a conservative Jewish household. He and Rachel were friends long before the duo began dating.

After six years as boyfriend and girlfriend, Rachel and her husband Dan got married in 2015. The duo’s wedding was officiated by the latter’s cousin.

By their admission, Rachel and Dan practiced parental skills on their dog.

The veteran voice actress is the daughter of musician Shelli Rosenberg and health care lawyer Alan Bloom. With no siblings, she’s her biological parents’ only child.

A native of California, Rachel is a graduate of Mira Costa High School. Also, she holds a BFA degree from NYU’s Tisch School of the Arts.

Net Worth + TV Shows and Movies

Rachel Bloom’s history with mental illness is well documented. Her experience with depression, anxiety, and OCD served as an inspiration for the critically-acclaimed series “Crazy Ex-Girlfriend.”

Gifted with a beautiful voice, Rachel is also a recording artist. “Please Love Me” and “Suck It, Christmas” are her notable indie projects.

Flexing her vocal prowess, Rachel has provided voice-over actings on tv shows and movies such as “Robot Chicken,” “The Angry Birds Movie 2,” “Most Likely to Murder,” and “BoJack Horseman.”

All her show-biz endeavors combined, Rachel garners a reported net worth of $2 million.