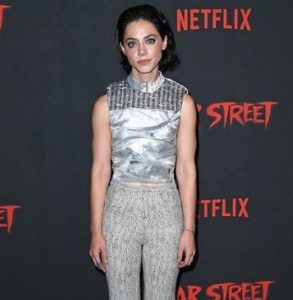 Elizabeth Scopel might be known as a budding actress in movies and TV shows, however, she is widely known for her work in theatres. In 2021, she appeared in a TV movie titled Fear Street which had three sequels.

Learn about the actress, the part that she plays, and information on her parents, siblings, career, and total net worth with this Elizabeth Scopel Wiki.

Fear Street is a Netflix show which was adapted from R.L. Stine’s novels of the same name. The show is based on the life of teenagers who put aside their personal differences to solve the mystery behind murders in their town.

In the show, Elizabeth Scopel played the role of Sarah Fier, a one-hand witch. One of the high schoolers, Josh played by Benjamin Flores Jr. is a high schooler who suspects that all of the gruesome murder was perpetrated by her.

In the book, Sarah is a character who was burned at the stake for being a witch 300 years before the events of the first book, creating a centuries-long feud between the Goodes and Fiers.

Talking about her career as an actress, she built her skills in theatre.

In an interview with Skeletonrep.org, Elizabeth shared: “I wanted so badly to be in a production of Annie when I was in second grade, but I was too young. Instead, I had to be in the Christmas Pageant as “Sock-Hop Mrs. Claus.” It was a silent role.  I cannot sing, but I thought I could if only I could have the opportunity to shine, so after my military dad made us move in fifth grade, I brashly auditioned for Oliver (the kids’ version) and got the title part because I was missing teeth (and it was the only part that did not involve singing)”

Some of her theatre works are Lesbian Bathhouse: The Movie performed at TADA! Theatre, LAST CHANCE performed at Gene Frankel Theatre, Some Night performed at Ophelia Theatre, and House of Andronica: A Titus Redux.

Elizabeth Scopel turned age 28 in October of 2020. She celebrates her birthday every year on 6 October. Likewise, she secured Libra as her zodiac sign.

Military man Donald K Scopel and his wife Ann Kathryn Scopel had Elizabeth A Scopel as one of the three kids in their hometown of Huntingtown, Maryland, the United States. Both of her parents are the age of 56 in 2021 — Donald was born in June and Ann was born in April. Besides the names of her parents, almost no information has been shared as of this writing.

Talking about her two younger siblings, Elizabeth has a sister named Magdalena “Maggie” Scopel and a brother named Andrew Scopel. Maggie turned 27 on 1 May 2021. Andrew turned 24 in September of 2020.

One of the distinct features of Andrew was his handlebar mustache and even though he is on Facebook he revealed almost no information about himself. As for her sister, Magdalena studied Dental Hygiene at Howard University College of Dentistry. She has also been a trainer at CrossFit Merit.

Elizabeth Scopel stands tall at a height of 5 feet 3 inches (1.60 meters). She weighed nearly 45 kilograms (99 lbs) because of her slim physique. Furthermore, she has a measurement of 31-24-32 inches.

Elizabeth Scopel sits on a total net worth of $200 thousand.

To support her acting career, Elizabeth also worked for Fleisher’s Grass-Fed & Organic Meats as a Cashier/Social Media Intern for three months. Then she became a research assistant for Vassar College for almost two years. During that period, she was responsible for providing general assistance, research, and correspondence for the Director of Theatre; creating multi-media tools; submitting funding/ grant requests.

From September 2014 to September 2015, Elizabeth also worked in Ticket Central as Box Office Associate. After that, she joined Capgemini as Knowledge Worker Information Broker in November 2014 where she has been working ever since.

Elizabeth also started working in Imaginal Labs as Graphic Facilitation in January of 2017. She became a freelance artist in May of 2017.

Her on-screen work includes movies and TV shows such as Local Hero, Grave Secrets, Ghosted: Get Some, Skin the Wire, Chicago Med, Half-empty, FBI: Most Wanted, and Fear Street sequel.

Elizabeth Scopel is very private about her dating life. She is too pretty not to have a boyfriend and being the age 28, she must have at least one before. But, her romantic life is a total mystery and we’ve little to no info on her relationship status.

Furthermore, her social media also spared no information on her possible boyfriends.