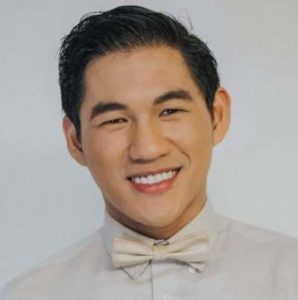 Ehrlich Ocampo, who is otherwise a fan of Heidi Klum, took his audition performance on America’s Got Talent 2021 to impress the hard-to-impress Simon Cowell on July 12, 2021.

And soon, Ehrlich not just made an impression on Simon but everyone in the star-studded judges’ table and the audience.

The act was indeed a perfect illustration of “excitement, thrills and feel-good performances” AGT is used to.

In the meantime, discover Ehrlich’s journey until AGT and more in this Ehrlich Ocampo Wiki.

Ehrlich traveled all the way from his hometown in the Philippines to stun the judges with a “SPECTACULAR” audition on AGT Season 16. He arrived in the States nine before he went on stage.

So, Ehrlich clearly earned all four yes(es). Meaning, viewers would get to see him in the next round.

Also before showing off the act featuring Leviwand and hoops, he briefly discussed his story of how he gave up everything to pursue it.

“I am here fighting for myself, my family, my friends, my community, my country.”

People told him he was crazy and even he himself did not think ‘the dream to be on AGT’ was possible. But because his friends and family were supportive and inspiring, he finally got to live his dream of AGT.

Ehrlich Ocampo was reportedly born in 1987. So, if that were to be true, he would have reached the age of 34 by the time he celebrated his birthday on the 29th of May in 2021.

Ehrlich continued to live in Manila, the Philippines with his family.

On occasions including Father’s Day, Mother’s Day, and likewise, he mentioned his parents on his social media sharing. Of which, we learned, he looks like his dad and his mom “nanay”, Editha Ocampo was on Instagram @edithaocampo.

Also, Ehrlich has two siblings, a brother, and a sister. Sister, Isabella Ocampo, is a wanna-be entrepreneur. The other sibling, Erron Ocampo, is an executive photographer at Metrophoto and owner at Plant Buds Ph.

Both of Ehrlich seemed happily married with kids. So, Ehrlich also gets to feel “awesome being uncle” to a bunch of nieces and nephews.

Until July 14, 2021, Erlich Ocampo had several Instagram accounts  @ehrlichmarz, @ehrlichocampoart, and @firechill.ph. One, is his personal blog, another one, for his magic, dance, and acrobatics, and the last one is for his display of visual and literary art.

Before Ehrlich participated on AGT vying to win America’s hearts and a $1 million prize, he had above an estimated $650K net worth.

Combines his dance abilities with the beautiful art of poi spinning and levitation wand since 2010, he studied fire dancing at Planet Zips Poi Academy. He also attended the College of Fine Arts & Design, Major in Advertising Arts at the University of Santo Tomas.

As of July 2021, he worked as an artist at MSC Cruises, Ehrlich Ocampo Art, and Nes Artist Residency. Also, he was a circus performer at Cirque du Soleil, a fire/flow performer at Ehrlich “Firechill” Ocampo, and the founder/instructor at Leviwand Dance.

Basically, he aimed at developing a style that maximizes the body’s movements, making the prop an extension of his dance.

Then, in the past, Ehrlich was a performing artist at Okada Manila, a former actor at Repertory Philippines, and worked at Festival Mondial du Cirque de Demain in Paris.

Over the course, Ehrlich has traveled and been invited to numerous events in Singapore, South Korea, Malaysia, Thailand, America, and France. And every time, he felt just as much pride in representing his art and his country.

Ehrlich also is a motivational/inspirational speaker. Drawing experiences from his training to the streets of Manila, all the way to performing for the biggest circus in the world, he already has inspired many to become like him.

Ehrlich Ocampo never came out as gay (before the time of this writing). So, one could not tell if or not he is gay.

Ehrlich Ocampo Partner, Is He Married Or Dating?

Ehrlich Ocampo is also very secretive about his relationships and dating life. And because his social media also did not reveal anything as such, one could not tell if he is dating anyone. At least he seemed to have never been married before.

Judging from what is known thus far, Ehrlich is more focused on his craft of hula-hoop act, dance, and physical acting skills.