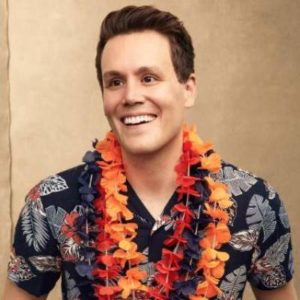 Love Island USA dropped on CBS and Paramount+ for Season 3 on July 7, 2021. Twelve new faces as its contestants arrived in Hawaii and so did the show’s only consistent member Matthew Hoffman.

Matthew has been the official voice, narrator, and co-writer of Love Island USA since the series premiered in 2019.

Discover his net worth, personal life, and more in this Matthew Hoffman Wiki.

Matthew Hoffman appearing seven nights a week on Love Island on CBS soon became a fan-favorite. Especially because he the only familiar face every time the show renews.

Talking to Parade, Matthew, who is basically every viewers’ best friend, revealed even though he is the narrator on Love Island, he is not really given anything in advance to prepare for the role. At the time, he said he does not want to know anything that happens on the show beforehand.

Because Matthew is used to receiving the likes of “Oh, we feel like we’re watching the show with you” comments, he sees the show in real-time the way viewer does.

“Everything that you hear is basically my initial reaction, so I’m just watching the show as a super fan.”

Fans absolutely love him for bringing his own unique flair and humor to the show.

Matthew Hoffman grew up celebrating his birthday every year on August 17th. This makes him a Leo who reached the age of 48 in 2020.

When actors Nanjiani and Emily V Gordon (from the movie The Big Sick) appeared on the show Matthew hosted for Regal, an entertainment news channel, the interviewer had teasingly highlighted “@kumailn and @emilyvgordon are MY NEW PARENTS !”

And this is the only time, his social media people heard him talk about parents. But clearly, even this one was not for real.

Matthew never really discussed his early life and family stories on public or media platforms. Except for once when he shared a “Happy National Uncle Day!” moment with his niece on IG writing, “Here’s to all the Uncle’s who are doing their best……until it’s just not fun anymore!.” The young one, with a big mischievous grin, had painted him all over the face.

Until July 14, 2021, Matthew Hoffman had 20.4k followers on his Instagram @matthewhoffman.tv.

Matthew also had two different ‘Matthew Hoffman’ Facebook one of which entertained more than 3.7K followers.

Also don’t miss Matthew on his ‘@MatthewHoffman.tv’ YouTube channel that, at the moment, included 1.76K subscribers.

Matthew Hoffman, the American television host/personality, had above an estimated $600K net worth by June 2021.

Besides Love island, the Theater (Boston Conservatory) alum also has been a special correspondent for Extra.

Also lately, he was honorably invited to comment on all things Pop Culture for The Year: With Robin Roberts.

He hosted The Greatest Interview Ever With Matthew Hoffman on People’s List for ABC News. Occasionally, he was also presenting the celebrity interview show Sit Down With The Stars for Regal Movies, and You Know That Scene for Focus Features.

Moreover, Matthew hosted the LIVE Official Red Carpet at the 63rd Annual Grammy Awards as a MasterCard Ambassador. He was also honorably made to announce over 40 Billboard Music Award winners at the BBMA pre-show for Dick Clark Productions.

Matthew Hoffman Partner, Is He Gay?

Amidst the gay speculations concerning Matthew Hoffman, the only information we could share at the time is, Matthew loved the LGBTQ+ community and felt proud to be a part of it.

Making a Pride Video celebrating the community he belonged to, he shared, “To me, pride (month) is being proud about who you’re just the way you’re. It is just that simple. It is about appreciating and loving your authentic self.

Matthew had notably featured on LA Confidential’s Portraits Of Pride 2018.

That been said, at the moment he did not seem to be dating anyone. Matthew Hoffman rarely spoke about his romantic partner.

More Facts about Him