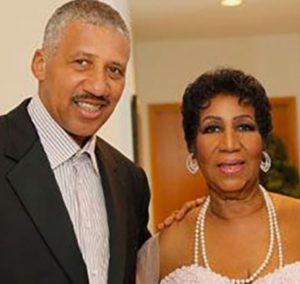 Edward Franklin is the second-born son of Aretha Franklin. Even before and after the death of Aretha, he was involved in several notable events. The life of the late soul singer’s son always fascinated her fans.

So, learn more about Aretha Franklin’s son in this Edward Franklin Wiki.

Edward Franklin was born as one of the first two children to his dad Edward Franklin Sr. and his mom Aretha Franklin in Detroit, Michigan, United States. His mother was 14 when she had him after she hooked up with his father “player.” He and his brother Clarence were raised by their grandmother Rachel and aunt Erma when their mother’s career as a singer thrived.

While Aretha claimed that she had her kids with her schoolmate, yet in the wills, she reportedly had handwritten Edward Sr. as his father. In David Ritz’s 2014 biography, Respect: The Life of Aretha Franklin, Edward Jordan Sr. was described as a “player.”

Almost no information surfaced regarding Edward’s dad. However, Aretha Franklin’s handwritten Will contained that Edward’s dad should never receive or handle any money property belonging to Clarence or that Clarence receives as he has never made any contribution to his welfare, future or past, monetarily, material, spiritual, etc, except $5 or $10 when he was a child.

How Many Siblings Does Edward Franklin Have?

Edward Franklin had four siblings growing up. He had an elder brother Clarence who was a year older than him who was the firstborn of his parents. Then, his mother married her first husband Theodore ‘Ted’ White in 1961, when she was 19. Later, born was his half-brother Ted ‘Teddy’ White Jr. His youngest half-brother Kecalf Cunningham was born in 1970 after his mother’s relationship with manager Ken Cunningham.

Aretha Franklin and Ken Cunningham were reportedly married in the 1960s.

Both Edward and his elder brother Clarence, along with Kecalf were raised in Detroit. For several years, they formed a tight-knit unit, according to Rev. James Holley, a confidante of Ms. Franklin’s who spoke at her funeral.

The bond between the four brothers fell apart, after the eldest son of Aretha was diagnosed with mental illness.

Whereas, Ted White Jr. grew up largely with the family of his father’s side.

All four brothers pursued a career as a musician. Kecalf performed as a Christian rapper under the name Kecalf Cunningham. Ted White Jr. played guitar for his mother for over 20 years. Clarence wrote several songs for his mother.

Since the health of Clarence degraded while Aretha was alive, she instructed on the last draft of her will that the other three brothers should check on Clarence’s welfare weekly.

Pursuing the steps led down by his as a singer, Edward Franklin also aimed at becoming a gospel singer. He performed duets with his mother, sang at his mother’s funeral as well as his grandfather’s funeral.

The mother-son duo also recorded a Christmas song, a video to which is available on YouTube. Edward inherited the same skillsets as a singer with his mother. He has been described to be remarkable and had the ability to hit the high notes as his mom did and also created a rendition of Aretha’s favorite gospel song His Eye Is On the Sparrow.

Disappointingly, four brothers were divided when the matter of division of Aretha’s estate came to the light. Based on the 2014 will, Clarence hasn’t been listed as a beneficiary. If the authenticity of the wills is declined, he would rightfully receive one-fourth of his share.

But Kecalf and Edward favored 2014 Will and were aggressive on the court. Kecalf even accused Sabrina Owens, the cousin of four brothers as well as the representative and executor, of mismanagement and petitioning the court to take her place in running the estate.

Edward Franklin largely sides with Kecalf about the Wills.

Back in 2002, Edward was alleged to be involved in the arson of Aretha’s home in Franklin’s Bloomfield Township in Michigan. During the arson, traces of accelerants were discovered in the charred remains of her home and on the clothing of her son.

The investigation reported Edward as the suspect, but no one was charged for the fire that destroyed 10,000 square feet home. It wasn’t his first time getting in trouble.

In 2010, Edward was at a Detroit gas station when he was badly injured in an attack by two men and a woman. Immediately after, he was rushed to a hospital and underwent surgery, although neither he nor Aretha ever spoke publicly of the nature of the beating. No suspects were arrested.

Except for his brother Kecalf Cunningham, none of the other three brothers had kids. Edward Franklin, in particular, hasn’t even publicized his married life or even having a wife. So, his marital status remains obscure as of August 2021.

It has been reported and shared widely that Aretha Franklin had only three grandchildren all of whom were from Kecalf.