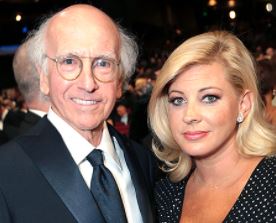 The wedding bells are chiming, and this time tying the knot are, Curb Your Enthusiasm star, Larry David, and his girlfriend, Ashley Underwood.

Larry, at the age of 73 has married his three-years-long girlfriend, Ashley. The news came as a surprise for many, as they believed that Larry was done with matrimony. Previously, Larry had his split from his 14-long-year marriage with the environmental activist, Laurie David in 2007.

So who is Larry’s second wife, Ashley? Learn everything about her as this wiki-style article proceeds.

Details on Ashley’s birthday wasn’t shared. Thus, her zodiac couldn’t be established either.

Also, do not confuse the name “Ashley Underwood” with the contestant from Survivor: Redemption Island. She is a different person from Benton, Maine, and was 35 years old in 2020.

Born and raised in Georgia, US, Ashley Underwood held an American nationality. However, later she reportedly moved to London, and before 2020, she lived in LA, California.

Ashley didn’t talk much about her early life or family.

Mentioning her distinct features, Ashley has green eyes and a beautiful nose. Also, she liked to keep her hair color blond.

But keep your eyes open as you may see her over David’s Instagram @curbyourlarrydavid with over 526K followers and his Twitter @BeingLarryDavid with 55.7K followers.

Ashley Underwood was a contributor at “huffpost.com” and her job description mentioned her as a “Screenwriter, blogger, humorist and traveler.”

For education, she attended the Class of ‘01 at the American University of Paris for B.A. in Comparative Literature. Furthermore, she joined John Marshall Law of School, the Class of ‘13 for J.D.

In 2020, Ashley Underwood’s net worth was estimated to be beyond $300 thousand. Apart from this, she is also entitled to her husband, Larry David’s mind-blogging net worth of $400 million.

Ashley Underwood and Larry David tied the knot on the 7th of October 2020. Their wedding was held in the evening in Southern California.

Surprisingly, no one knew when were they engaged, or did they even?

The duo first met in 2017 at Sacha Baron Cohen’s birthday party. Ashley was friends with Sacha’s wife, Isla Fisher and luckily was seated next to Larry at the celebration.

Larry recalled that he was doing so well (banter wise) but much to Ashley’s surprise, he left before dessert. He added,

“I didn’t want to risk staying too long and blowing the good impression.”

Guess he made the right move. Impressed with Larry, the couple soon started dating and in 2019, Ashley moved in with Larry at his Pacific Palisades home.

During the quarantine 2020, the duo we holed up at home with Ashley and his daughter, Cazzie. Larry shared,

“There’s not a moment in the day when there isn’t friction between at least two of us.”

Furthermore, Larry added, their greatest problem was “not waiting for the other to watch the show”.

If you dint know, Larry shares two kids with his ex-wife, Laurie David named Cazzie and Romy who were 26 and 24 respectively in 2020.

A little info on Ashley’s husband, Larry David: He is the producer and writer of the hit NBC series, Seinfeld. Also, the creator, writer, and lead actor of HBO’s Curb Your Enthusiasm (2000). He dated his co-star, Amy Landecker from  Curb back in 2011 for a while.

Daughter-in-law of senator Bernie Sanders Raine Riggs passed away on 5th October 2019. She was 46 years of...