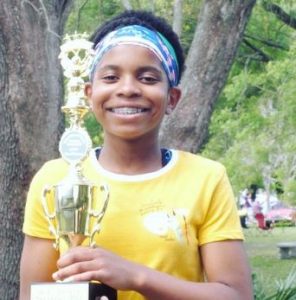 Before Spelling Bee, Zaila Avant-garde was known as a basketball prodigy who appeared in a commercial alongside Steph Curry. But, after her win in the Scripps Spelling Bee championship 2021, she earned multiple accolades.

Learn more about the Louisiana-based genius with this Zila Avant-garde Wiki where we discuss details son her parents, siblings, school, and height.

Zaila Avant-garde became the winner of the 2021 Scripps National Spelling Bee championship. She became the first African-American contestant to win the show in the 93rd edition of the show. The spelling bee event was organized at the ESPN Wide World of Sports Complex at Walt Disney World Resort in Lake Buena Vista, Florida, on July 8, 2021.

In the last set, Zaila secured the title by correctly spelling MURRAYA – A type of tree- which helped her clinch first place. She left the event with a $50,000 cash prize. The event began with 209 spellers from age 9 to 15 from five countries: the US, Canada, Ghana, Japan, and the Bahamas.

Along with Zaila, other 11 contestants entered the show’s final round.

Back in 2019, she went as far as the third round of the national tournament but she was tripped by the word ‘vagaries.’

In 2020, Zaila won Kaplan-Hexco Online Spelling Bee — one of several bees that emerged during the pandemic after Scripps canceled last year. She used the $10,000 first prize to pay for study materials and $130-an-hour sessions with a private tutor, 2015 Scripps runner-up Cole Shafer-Ray.

Zaila’s not only made her the first African-American to win the show but she also became the second Black contestant to win the show since Jody-Anne Maxwell from Jamaica in 1998.

Zaila Avant-garde has landed the opportunity in 2018 to appear in an Under Armour commercial alongside NBA star Steph Curry. So, what made her capable of appearing beside one of the greats.

The Harvey-native Zaila Avant-garde is not only a genius with the words. She also comes second to none in basketball and has been dubbed as a basketball prodigy. As reported, she holds three Guinness World Records for dribbling multiple balls simultaneously.

She has been playing basketball since the age of 5. “My parents were panicking because I had too much energy,” Avant-garde says. “They threw a ball at me, and said ‘Do something,’ basically to get my energy out.”

More precisely, Zaila dribbled six basketballs for 30 seconds, she also bounced 307 times in 30 seconds, whereas she also did the most bounce juggled with (255 using four basketballs).

According to Zaila: “Basketball, I’m not just playing it. I’m really trying to go somewhere with it. Basketball is what I do. Spelling is really a side thing I do. It’s like a little hors d’ouevre. But basketball’s like the main dish.”

As reported on several major outlets, Zaila Avant-garde was 14 years old when she competed in the Spelling Bee event in 2021. However, her precise birthday is yet to be known hence her zodiac sign and her birthday remain anonymous.

Zaila Avant-garde was born to her father Jawara ‘Spacetime’ Heard and her mother Alma Vernice Heard in her hometown of Harvey, Louisiana, the United States. In honor of the jazz artist John Coltrane, her father had named her Avant-garde.

Talking about her mother, Alma earned her bachelor’s of arts degree from Southern University at New Orleans in 2010 in History. Then, she earned her MLA degree in history from Tulane University.

Alma had worked in Caesars Entertainment Corporation as Transportation/Valet Supervisor the became a Regional PBX Supervisor. She has been working as a Passport Specialist in the U.S. Department of State.

Zaila Avant-Garde reportedly had three brothers for siblings. They are Sol Heard, Zwe Heard, and Wonder Heard. Not many details have surfaced on each of her siblings.

Furthermore, Zaila is on Instagram where she goes by the name (@basketballasart). The platform garnered her 16.7k followers and she has 252 posts.

As reported online, Zaila Avant-garde was homeschooled. So, she doesn’t attend a public school like other kids. It might be her because she has a tight schedule that she needs to get through. For spelling, she spends over 7 hours working on nearly 13,000 words (per day).

But, since she played several games for Lady Eagles, Zaila might’ve attended Belle Chasse Academy based in Louisiana.

Zaila doesn’t let it go way too overboard, of course. She also got the school to do and basketball to do to practice. She hopes to be a WNBA player, a basketball coach and has aspirations to become an archaeologist.