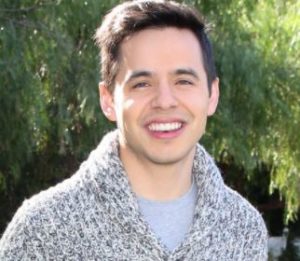 Remember the song “Crush”? Yes, the one that goes, “But I know this crush ain’t going away e yeah.. e yeah.. eyeah.. eyeah”. It was the song that put the name, David Archuleta on the Billboard chart back in 2009.

Fast forward to 2021, David again took to the major spotlight; but this time, not for his musical talent, rather David opened up about his sexuality and came out as a member of the LGBTQIA+ community.

So, who is his partner? Is David gay, and does he have a husband or a wife? Keep reading to find all about it.

Yes, David Archuleta is gay. Although he first came out as “gay” to his family in 2015, he then had feelings for both genders, suggesting he might be “bisexual.” But he later went on to find himself not having “too much sexual desires and urges as most people.” So, he labeled himself to be “asexual”.

Overall, David has recognized himself in three phases: from coming out as “gay” to learning he was “bisexual” to finding himself to be “asexual”.

Talking more about his sexuality, David confessed that it was “uncomfortable” for him to share this personal aspect of his life. But, he wanted to help people in a similar situation and encourage them. Moreover, he wanted people to know that choosing between being LGBTQIA+ and believing in God shouldn’t be an option.

As of 2021, David Archuleta wasn’t married. So, that rules out the possibility of him having a husband.

But what about his partner? Well, David was a shy guy who didn’t like talking much about his dating life. However, he was open about his “commitment” to “save himself” until marriage. Guess, his partner would be someone who’d respect his wish for abstinence and someone preferably “asexual”.

Did you know: In 2015, David once tweeted, “Love is nourished by the coming of children, who spring from the fountain of love…expressed between a man and a woman in marriage,” and obviously fans weren’t having it.

Two days later, David posted an apology on his website mentioning that didn’t think about the line “expressed between a man and a woman in marriage”.

As mentioned before, David Archuleta wasn’t married. So again, he didn’t have a wife as of 2021. But he seemed to be looking for one since 2014. In a Facebook event, David was once asked what were the qualities that he was looking for in a wife, and he had a long list.

To summarize, his wife would “need to love the Lord.” She should be “confident, sure of themselves, and carry themselves well.” Also, she should be “fun to be with.” Last but not the least, she should have “virtue” and “be supportive.”

Talking about his dating history, David’s first known girlfriend was Hagood Coxem, whom he dating in 2008 but they split soon after. Then, he dated Jackie Castro for a year until they parted ways in early 2009.

After Jackie, David was rumored to be dating the singer Jordan Pruitt in 2009. They first met on a turn in the summer that year. However, the rumor was later shot down by David. Also, the same year, David dated the Brazillian actress, Fernanda Andrade.

Corresponding to his birthday, David is of the Capricorn zodiac.

David Archuleta comes from a family of five siblings. He has a one-year-older sister named Claudia, a 3-year-old smaller brother named Daniel, and two smaller sisters named Jazzy, and Amber, who were 6 and 8 years younger respectively.

As for his parents, Jeff and Lupe (both of the same age), they were both singers and dancers. His dad was a jazz trumpet player while his mom sang pop music in both English and Spanish. But the two always had a tumultuous relationship, and it even led them to file for divorce in 2002. Fortunately, they soon reconciled after David placed first in the Star Search competition.

Trivia: David didn’t get along with his father. Moreover, his dad getting charged with soliciting a prostitute didn’t particularly help David with his career as well.

His Religion: Is He A Mormon?

Yes, David Archuleta was raised as a Mormon. He even took a  two-­year break from his music career to serve as a full­time mission for The Church of Jesus Christ of Latter-day Saints in Chile.

Although the religion opposed the concept of LGBTQIA+, David claimed that he still was a person of “faith”. He shared, “For me to find peace the reality has been to accept both are real things I experience and make who I am.”

By 2021, David Archuleta garnered a net worth of $5 million.

Flaunting his tenor vocals, David first attracted the fans in 2008 as he finished second-place finish on American Idol. Since then, the singer has had successful solo albums including The Other Side of Down, and Postcards in the Sky.

Besides singing, David is also an actor. He has appeared on the TV series Nandito ako (2012) as “Josh Bradley”, and has acted on most of his music videos.