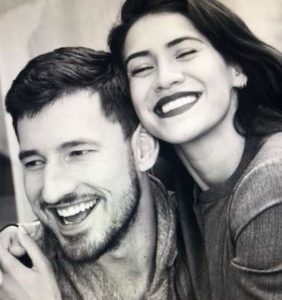 Daniela Soto-Innes and Blaine Wetzel are leading restauranteurs and are married to each other.

Following Mexican-American chef, Daniela’s stint on Discovery+’s new cooking competition show, The Globe, that premiered on July 17, 2021, TV foodie fans have been even more curious about Daniela, her husband Blaine, and their life together.

So, in this Blaine Wetzel Wikipedia discover all about Daniela Soto-Innes husband the renowned head chef of The Willows Inn on Lummi Island and cookbook author of Lummi: Island Cooking.

Where Is Blaine Wetzel From?

Blaine Wetzel grew up in remote Lummi Island, Washington, which is a two-hour drive and 10-minute ferry ride north of Seattle.

On Aug. 7, 2019, as Blaine took to his Instagram a memory from his folks’ 25th marriage anniversary celebration, Daniela adorably commented “That’s going to be us, baby 😍🙏🏼”.

Then, talking to The Times, Blaine had said, “my stepmom and brother are Chinese, my wife is Mexican, and anyone that would claim I was racist is lying.” This, he had countered when denying all allegations that he was accused of in a story published by The New York Times.

A new exposé by The New York Times‘ Julia Moskin had included all allegations (of fostering a toxic workplace) from former employees of Blaine’s Willows Inn. The staffers had accused Blaine and his manager Reid Johnson of overseeing a pattern of sexism, sexual harassment, and racist bullying, and misleading customers about ingredients. The restaurant was also accused of wage theft.

Blaine, however, denied all of it but paid $600K to settle the suit on his lawyer’s advice.

Again, about his family, back in 2014, Blaine shared the James Beard rising-star award, which he won, with his parents in attendance.

Too good-looking to be just a chef, Blaine Wetzel stands above 6 feet or 1.83 meters in height.

Aiming “just for fun”, Blaine was also on Facebook where he enjoyed a few closest followers.

Blaine Wetzel had above an estimated $5 million net worth (as of 2021).

He started working in kitchens at the age of 14 and studied and apprenticed Rene Redzepi’s chef-de-partie at Noma in Copenhagen.

More than anything, since arriving on Lummi Island, Blaine has brought international attention to the island. Creating exquisite meals with a commitment to locally sourced ingredients from the island and the ocean around it, he, in some way, provided for his islanders as well.

Around July 2020, Blaine was beyond grateful that his restaurant Willows Inn in the Lummi Island, Washington proudly made it to #1 place in the 2020 North America Top 100+ restaurants ranking.

Blaine and Daniela’s love story started in the summer of 2018 at a pintxos bar.

He had just landed in Bilbao, Spain, after a long series of flights from Lummi Island — the day before the annual awards announcing the World’s 50 Best Restaurants. So that evening when out for a bite with some chef friends, he spotted “this smoking-hot girl” at the end of the bar. Of course, it was Daniela, who also was in town for the awards.

“I turned around, and I see the most gorgeous man I’ve seen in my life. And we stared at each other for like a while, I don’t know for how long.”

They started chatting never knowing they both were chefs and would someday be termed as a new restaurant-world power couple.

For a while, they weaved a long-distance relationship despite their intense schedules as chefs in the spotlight.

They were engaged by March 2019 and the next year on Jan 25th, they exchanged wedding vows, in a ceremony officiated by one of Daniella’s sisters.

Blaine and Daniela love to Instagram the highs and lows of their relationship. Oftentimes, they gushed about one another on social media.

Be it when wishing his happy wife on her birthday, when congratulating her on being recognized as a Mexican national treasure or when on a certain day Daniela woke him up with a freshly baked blackberry pie, Blaine made sure his partner knew how “heavenly” he feels towards her.