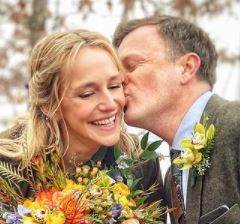 6 months after Nick Cordero’s death, his wife Amanda Kloots said she was ready for therapy. Very few people know Nick was her second husband. Her first husband is David Larsen.

Keep reading and find out David Larsen’s wife now, age, and height. What’s more, discover his marriage to Amanda including their wedding.

Moreover, having a 23rd April birthday, David summons Taurus as his zodiac sign.

David Larsen is a native of Portland Oregon.

From what David’s IG posts told us, he was born to his anonymous father and a mother named Kristi Piland Larsen.

For siblings, David has a brother named Kevin and a sister named Nikki. Also, Kevin married his wife, Amy Hillner. Meanwhile, Nikki tied knots with her husband, Ryan Graham in 2012.

More on his family: David seemed very close to his grandparents.

As for his distinct features, David possessed at least one tattoo.

As of Jan 2021, David enjoyed around 1.5 thousand followers on Twitter.

Likewise, some 2.3 thousand followed him on Instagram. On the platform, he had over 1 thousand posts.

As his Wikipedia page noted, David is a stage actor. His Broadway credits include a role in plays such as Hands on a Hardbody, American Idiot, The Book of Mormon, Good Vibrations, and Billy Elliot.

Working on TV, he starred as Cole Parsons on Boston Police. Likewise, his notable movies are Touched by an Angel and Templar Nation.

Also a musician, David released several projects including One of a Kind, Borrowed Time, Demonstrable Madness, Night Shift, and Show Me the Way Home – EP.

Amanda Kloots met her first husband, David Larsen during their time with the Broadway show Good Vibrations. Shortly after, they started dating and tie the knot. However, details related to their wedding remained aloof.

Following a 7-year-long marriage, they separated. According to Amanda, the divorce was unexpected. Along with her marriage, her career also was experiencing a downward trend.

Opening about the divorce, Amanda once wrote— “At the same time, I found my marriage unexpectedly and abruptly ending after seven years. Just six months before it seemed like everything was about to fall into place, now everything was falling apart.”

She continued— “I found myself in my thirties without a job, without a husband, and without a plan.”

A year before the divorce, Amanda met Nick Cordero. She and Nick got married in 2017. 2 years later, they welcomed their son Elvis Eduardo Cordero. The couple remained married until Nick’s untimely death in 2020.

Who Is David Larsen Wife Now?

Emilee, according to her Instagram bio, is a storyteller, poetry lover, teacher.

Emilee and David eloped in December 2020. The couple shared the I Dos at Pequannock Watershed. Instead of a traditional wedding, they opted to elope.