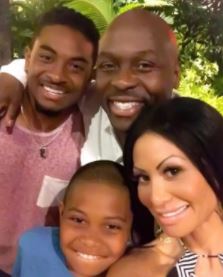 Sharrieff Shah came into fame way before his wife Jennifer Shah starred on the Real Housewives of Salt Lake City (RHOSLC). He gained prominence as a cornerback coach for the University of Utah.

To learn more about Sharrieff Haha Sr., delve into this wiki.

Sharrieff Shah was born on 29 January 1971. He turned 49 years old while celebrating his birthday in January 2020.

Per his date of birth, Sharrieff settled with Aquarius as his zodiac sign and happily imbraced all of the character traits the zodiac brought along.

Sharrieff Shah hailed from Los Angeles and shared a certain degree of truth behind L.A.’s bad reputation portrayed in movies and books. While growing up, life wasn’t easy for him, but his parents certainly showed him the right path to tackle the obstacles of life and life in the streets of L.A.

Even though his parents got divorced at an early age, their co-parenting agreement did work pretty well for Sharrieff. Sharrieff often cited his anonymous father as a role model and best friend. He even cited their relationships like the one between ‘Tre’ and ‘Furious’ in Boyz ‘n’ the Hood.

In L.A, Sharrieff witnessed both devastations brought by gang violence and the crack epidemic and the shift of the culture with the rise of fashion, music, art, among other things. But, listening to his calling in football, he moved from L.A. to Utah in 1989. Whereas, he left most of his family behind in his hometown and was angry that he had to move.

Thirty years later, he expressed gratefulness towards his father as it was the best decision that was ever made regarding his future. More on that, he also has a brother named Karim Abdul Jabbar who also played football for Miami Dolphins, Cleveland Browns, and Indianapolis Colts.

Both siblings are Muslim by religion.

Sharrieff attended Susan Miller Dorsey High School. Following that, he enrolled at the University of Utah and earned a bachelor’s degree in political science in 1993. After graduation, he pursued a master’s degree in exercise and sport science and earned his degree in 1995.

As an athlete, Sharrieff Shah towered at a height of 6 feet (1.82 meters), shorter than his son by only 2 inches. Whereas, he measured 108 kilograms (238 lbs), giving him a bulky look as he went on aging year after year.

Talking about his distinct features, he preferred to keep a bald head and had a round face with a smile that goes along with it. He is of dark complexion because of his African-American heritage.

Sharrieff avoids being on social media most of the time. An inspection helped conclude that he doesn’t own an Instagram account, unlike his son who garnered over 1 thousand followers at the time of this writing.

However, he is on Facebook but hasn’t posted anything for a very long time. But Twitter is where he spends most of his time. The account has 13.1k followers at the same time around.

After moving to Utah, he started his football career in 1990. But after three seasons out of four, he suffered a neck injury that put an end to his career after just three games into his senior season.

He played as a team captain and became an honorable mention all-Western Athletic Conference safety in 1991. Sharrieff was also celebrated as the Sports Illustrated National Defensive Player of the Week.

Also, he became the Player of the Week in Utah 1991 during the win of his team against Oregon State in 1991. He qualified for the WAC Indoor Track and Field Championships all three years.

As for his experience as a coach, Sharrieff coached cornerbacks and successfully sent five cornerback converts into NFL. He also coached Jaylon Johnson to All-America accolades in 2019. Likewise, he also coached Julian Blackmon who made it to the Indianapolis selection in 2020.

More on that, Javelin K Guidry signed an NFL free-agent contract with New York Jets in 2020.

Besides coaching, he also spent 12 years as a practicing attorney. He worked with Parsons, Behle & Latimer from (2001-2006) and later joined Siegfried & Jensen (2006-2011), the largest personal injury firm in Utah.

Additionally, medical malpractice and catastrophic automobile accidents were his fields of expertise during his career as an attorney.

As of 2020, Sharrieff Shah made an impressive $3 million net worth with his career as a coach and an attorney. As for his salary, it allegedly crossed $100 thousand.

As Sharrieff grew up in a Mormon community, she switched her religion and became a Muslim.

Sharrieff Jr. is a college grad who also played for his father’s team. As of 2020, he was also working at the University of Utah Health as Orthopaedic Medical Assistant starting from July 2020.

A year after her father passed away, Jen fell into depression. Sharrieff then advised her to pray instead of consuming medications. The advice almost led to divorce as Jen frequently lashed out at him. In the end, Jen began taking anti-depressants.

Jen once accused her RHOSLC co-star, Whitney Rose of screwing her marriage with Sharrieff. The accusation arrived during a heated exchange in an episode aired in Dec 2020.