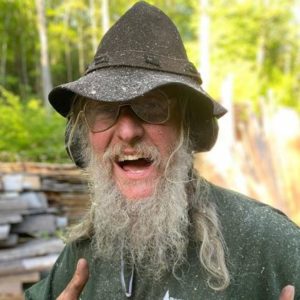 Living deep in North Carolina’s majestic Blue Ridge Mountains, Eustace Conway enjoyed a eudaimonic life. He lived in the place he so calls Turtle Island for over 30 years. Facing the poachers, scavengers, illness, bad weather, and the many more struggles, Eustace lived his life self-sufficiently.

Eustace Conway first came to limelight through the History Channel’s Mountain Men. Besides allowing them to film his lifestyle, Eustace even offered workshops for basic survival techniques. His ancient survival methods and the use of primitive tools piqued the interest of the audience soon enough.

While you may know about Eustace’s lifestyle through the show, we are here to let you in on aspects that were left uncovered. Learn more about if Eustace Conway ever had a wife and was married as the article continues.

As of summer 2020, Eustace Conway was alive and doing well. While the rumors floated around of him being dead, surely a person living in self-isolation for years wouldn’t fall victim to the pandemic virus.

As a naturalist, Eustace advocated the freedom of individuality in all aspects of life. He followed his dream of living in the natural habitat he loved — healing and growing in a natural state. Reportedly, Eustace had severely cut his thumb once. He used plant medicine and sewed it back together with twelve stitches.

Apart from this, on 12 Dec 2012, Eustace was arrested for trespassing in a neighbors land in the Triplett community of Watauga County. He was released hours later with a courtroom warning, “Do Not Threaten or Harass Margaret Palms.”

Biography — From Family To Net Worth

As for his education, Eustace has a bachelor’s degree in English and anthropology from Appalachian State University. Moreover, Eustace’s parents and grandparents were educators too.

In 2002, Eustace’s biography was penned down by Elizabeth Gilbert in the book The Last American Man. All of his learnings and experiences in the wilderness were included in the book.

Eustace started his adventure at the age of 17, living away from his family in an Indian tipi for 17 winters. He has canoed 1,000 miles on the Mississippi River, walked across America on the Appalachian Trails, and kayaked to cover the entire southern coast of Alaska. Moreover, he also held the world record for coast to coast horse travel from the Atlantic Ocean to the Pacific Ocean in 103 days.

Any praise wouldn’t suffice for the man who lived self-sufficiently without a family. Using only harvested materials in the wild, Eustace has built 9 handcrafted log buildings. Also, he trained his mules, horses, and bulls to pull logs, sleds, wagons, and to plow the gardens.

As of 2020, Eustace Conway’s net worth was estimated to around $800 thousand.

Were Eustace Conway And Preston Roberts A Couple?

While his fans may be influenced by “Brokeback Mountain”, Eustace may have led a different life. Eustace’s and his friend/co-star to the show, Preston Roberts seemed close to each other. They enjoyed the adventures together and it was only natural for his fans to picture them as a couple.

Though Eustace remains silent on the matter, it’s safe to say that he loved Preston dearly. After Preston’s passing away in 2017 from the liver tumor, Eustace expressed his grief for losing his 35 years long best friend. He mentioned, ‘Preston’s constant loyal support and inspiration was the best thing I ever had in my life”

Moreover, Eustace proved his loyalty by helping Preston’s wife to adjust to the loss of her husband, with no income. He urged the fans to donate to her “GOFUNDME” page and wished courage to weather through the storm.

When it came to relationships, Eustace had some obsolete ideas about women. Admittedly, Eustace once told a woman that he hoped she would bear him 13 children. In his defense, Eustace added,  “One hundred years ago a woman wouldn’t have been scared by that idea.”

According to the Literary Traveler, Eustace’s past girlfriends all had one thing in common. The publication wrote, “Women that were once strong and independent turned into submissive cheerleaders when paired with Conway, giving up much of their own identities to support his vision of Turtle Island.”

As of 2020, Eustace didn’t share much about his past relations. Perhaps, it was best suited for Eustace to have unmarried life. Wife and kids would probably only hinder his lifestyle and theirs too.