Home EntertainmentRooney And Kate Mara: Who Are The Mara Sisters? All Info

Rooney And Kate Mara: Who Are The Mara Sisters? All Info 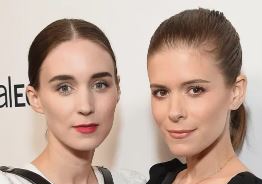 In Hollywood, owning the same last name as a fellow star means people are quick to label one another siblings. In the same vein, Rooney and Kate Mara drew a similar conclusion. They are indeed siblings.

Read along and separately discover Kate and Rooney’s professional and personal milestones.

She was born on 17th April 1985 to parents, Tim Mara & Kathleen McNulty Rooney, as Patricia Rooney Mara. Growing up, everyone called her Tricia. By her admission, Rooney never liked her first name. As such, she adopted her middle name for work.

“Law & Order: SUV” was Rooney’s first acting credits. She would eventually star in movies like “Her,” “The Girl With The Dragon Tattoo,” “A Nightmare on Elm Street,” and “A Ghost Story.” Furthermore, Rooney racked $12 million in net worth from her showbiz career.

Beyond her acting exploits, Rooney made a name for herself as a philanthropist. Before 2006, she founded “Faces Of Kibera” — a charity based in Nairobi, Kenya. What’s more, the non-profit merged with the Uweza Foundation circa 2011.

Rooney also founded a vegan clothing brand called “Hiraeth Collective.” An outspoken advocate for the vegan lifestyle, Rooney attends animal rights events. As an environmentally minded individual, she goes the extra mile to cut the use of plastic.

According to healthyceleb.com, Rooney stands five feet three inches in height. Meanwhile, she owns an ideal body with 33-23-34 inches measurements and 53 kilograms weight.

Coming to her love life, Rooney began dating director/actor Charlie McDowell circa 2010. After six years together, they broke up in 2016. What’s more, the duo didn’t reveal the reason behind the split.

While Charlie was still her boyfriend, Rooney got to know Joaquin Phoenix. They met in 2012 while working on Spike Jonze’s film “Her.” Rooney and Joaquin remained “e-mail friends” before reconnecting in 2016 while filming “Mary Magdalene.”

In 2017, Rooney and Joaquin became public with their romance. Two years later, they got engaged. More good news followed in 2020 after a source told Page Six that Rooney was pregnant and expecting a baby with Joaquin.

Unlike Rooney, Kate flaunts an extended dating list. In the early-2000s, she and actor Justin Long were reportedly an item. Also, from 2006 until 2008, Kate was exclusively dating the film producer McG. After McG, the “Fantastic Four” actress enjoyed a brief romance with actor Charlie Cox.

Kate and Jamie — her husband — welcomed a daughter in May 2017. A month later, she opened up about suffering a miscarriage.

0 Replies to “Rooney And Kate Mara: Who Are The Mara Sisters? All Info”