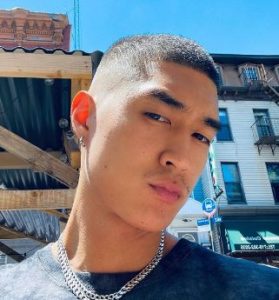 Peter Park is a contestant of FBoy Island who is of Korean-American ethnicity. Job-wise, he is a model, massage therapist, and aspiring actor. So, learn more about details on his parents, siblings, height. and net worth in this Peter Park Wiki.

Peter Park was one of the contestants of FBoy Island who arrived at the Cayman Islands in the Caribbean Sea. The show got hotter with three single females in a tropical environment with 24 men. Among them were 12 “good gentlemen” looking for love and 12 “FBoys” looking for money.

The women had to determine if the males truly care about them — or themselves. And it was certain to get fascinating. The winner took home the grand prize of $100 thousand.

However, Peter was eliminated early on. Still, he reassured us that just because he was eliminated didn’t mean we wouldn’t see more of him on the show. So, we might be in for a surprise.

Peter Park was 30 years old as of July 2021. He is an Aries by zodiac sign. He celebrates his birthday on April 13.

Peter Park was born to his mother Lisa Park and his anonymous father in his hometown of Fairfax, Virginia. However, he grew up in Springfield. As per his TikTok on 22 March 2020, his father abandoned and his family when he was 10. That’s the only piece of information he shared about his dad.

As for his mother, Lisa has been the greatest role model of his life. For Peter, she was also an inspiration and someone she looked up to, hence, Lisa was an important figure in his life.

Since their parents weren’t together for very long, Peter Park never had any siblings. Therefore, he was the only child of his biological parents.

Peter can be discovered across several social media platforms. His Instagram account (@thekoreanpapi) flaunted 19.3k followers until 31st July 2021. He had over 93 posts on the platform and he followed 255 IG users on the platform.

Peter’s oldest TikTok was posted in March of 2020.

Talking about Peter Park’s job, he has been working as a masseuse. He attended Northern Virginia School of Therapeutic Massage, one of the best Massage Therapy Schools in the states. He dreamt and work towards owning a private practice and become a celebrity massage therapist if he could, or work for the NBA.

Peter attended and graduated from West Springfield High School. As a high school senior, he was a candidate for several D3-D2 colleges, for basketball, but due to unforeseen circumstances, application deadlines could not be met.

Besides all of his job and education, Peter also pursued a career as a model. He got the start in modeling by helping his friend who had a photoshoot and asked him to join. But, lacked the technical knowledge on how to pose and look in front of the camera.

Once Peter posted the snaps from the day on his social media, he started getting compliments and encouraged him to try his hand at modeling.

Peter had plans to audition for America’s Next Top Model Cycle 22. Since not many Asian people were on the modeling scene in the states, so, he hoped on changing that. According to Backstage, Peter Park is a signed fashion model with OPTION 1 MODELS, Soul Artist Management, Dollhouse Management, and Scout Model Agency.

He also had a brief gig as a runway model and was featured on Vogue.

Not only that, but Peter also trained to become an actor. He attended T. Schreiber Studio who trained under Pamela Scott in New York. He attended Beginning Techniques for Actors and On-Scene Study.

Peter Park must have a net worth of around $150 thousand. As a massage therapist, he should make an average sum of $52,000 yearly salary. All of this contributes to his burgeoning fortune.

Although Peter Park is private about his dating life, he has made plenty of posts on social media. On IG, in October 2018, he posted that he was single on the pic but not in his real life. This suggested that he was dating someone at the time.

In September of 2019, Peter shared about his loyalty towards his partner because he appreciated her. But, he never gave away details on his girlfriend.

Similarly, Peter, as a TikToker, also made funny videos related to the topic, girlfriend. His videos were about a rude girlfriend, a few videos about having a Latina girlfriend, being a boyfriend to a non-Asian girl, and similar other videos.

Plus, the fact that he joined FBoy Island means, Peter was single at the time.