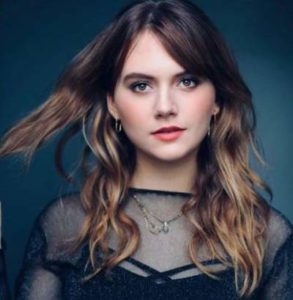 Looking for a feel-good story to sink into your couch this weekend?

The new film CODA (released in Jan. 2021) is just that. The remake of the 2014 French film The Belier Family is a “coming-of-age story, an underdog story, a romance, an examination of everyday life with a disability.”

In the writing below discover all about actress Emilia Jones who plays its lead character Ruby Rossi, a hearing teenage girl who is a child of deaf adults (i.e. CODA for short).

Emilia Jones, never having had an acting lesson before, led the cast of the award-winning CODA so well that many had it questioning if she is also deaf in the real life.

While Emilia believed only deaf actors could have done the roles of CODA a justice she herself is not deaf.

Emilia, with no sign language skills and a delicate voice, was obviously not the obvious choice at first. But, she spent nine months learning to sign, honing the New England accent, and strengthening her voice. With Vogue, she revealed, she trained with the coach Anne Tomasetti, who happens to be CODA’s “ASL Master” and “Director of Artistic Sign Language”.

Emilia was not allowed to have an interpreter on set.

Emilia Jones is the daughter of the Welsh singer, radio, and TV presenter Aled Jones and his English wife Claire Fossett.

Emilia shared her mom was the type to be in the corner on a film set somewhere reading a book, not interested in what was happening.

Emilia also has a younger brother with the name Lucas. In 2016, Lucas, then 12, had joined his dad on his album “One Voice: Believe” to duet on one of Aled’s favorite hymns, “The Lord is My Shepherd”.

How Did Emilia Jones Get Into Acting?

Emilia Jones shared coming from a creative family allowed her to feel — “I did not have to do anything else – if it made me happy, I could act.”

However, she did not have any formal training or an acting lesson.

As a child, Emilia would always role-play at home. She attended an improv games class in Barnes, south-west London, and it was not long before an agent put her forward for the film One Day, the classic rom-com starring Anne Hathaway and Jim Sturgess.

And just like that, her acting career began at eight in 2011.

Since then, Emilia has played Alice in the Channel 4 series Utopia and the BBC One sci-fi series Doctor Who in “The Rings of Akhaten” episode as the main character Merry Gejelh. She also portrayed Kinsey Locke in Netflix’s Locke & Key, and the character of young Fiona in Shrek The Musical.

Next, the Two for Joy actress is in the much-discussed Cat Person.

Before the world saw Emilia Jones in the first-ever film in history to win all of the Sundance Festival’s top prizes in the US dramatic category, she had below an estimated $600K net worth.

Is Emilia Jones Single Or With A Boyfriend?

At the time, Emilia was on her Instagram @emiliajonesy (with 339K followers) and Twitter @EmiliaJonesy (with 8, 203 followers). And these, never gave away if she is single or had a boyfriend. But these sure suggest Emilia is extremely engrossed in her craft and in making a name for herself in the industry. This may be one of the reasons why Emilia did not front or caused any rumors of sorts.

Or maybe Emilia has learned the business she is involved in can get tough now and then, from her dad’s case.

Her father, Aled Jones, who became a child superstar in the 1980s with his version of the Christmas classic “Walking In The Air”, faced an allegation of inappropriate behavior from a former colleague.

Aled had apologized for his “juvenile” behavior but also had denied any inappropriate contact.

Anyway, back to addressing her fans’ dilemma about her dating life — no, Emilia Jones is not dating her co-star and seemingly best-buddy Connor Jessup. Because, one, the American Crime actor had come out as gay not long ago saying “I’m grateful to be gay” and two, he also rather seemed (romantically) close with a guy named Jesse Wilson.
Emilia and Connor, however, have been misleading their followers writing the likes of “the wedding’s in August, you’re not invited” as captions on pictures they often share of each other.
You may see Connor on his Instagram @connorwjessup where he had 359K followers.
Also, Don’t Miss: Jenna Alexa Berman Wiki: Nick Bosa, Net Worth, Family

One Reply to “Emilia Jones Single, Boyfriend, Deaf, Net Worth”