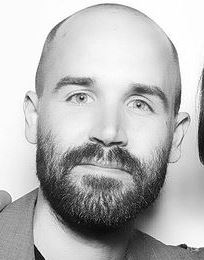 Our favorite show Brooklyn Nine-Nine and our favorite cops came back to our Television screen in August 2021 with a series of new misadventures. In that light, we have brought to an article about Brad Hoss.

Who is Brad Hoss? And how is he related to Brooklyn Nine-Nine. Well, you will get to know more about Brad in the passages below. For now, just know that he is the husband of Stephanie Beatriz, i.e. your beloved Rosa Diaz.

Brad Hoss was born on 22 January 1982. That means he was 39 years of age as of Aug 2021. And on his 39th birthday, his wife Stephanie Beatriz posted a rather beautiful birthday wish on her Instagram.

His zodiac sign was Aquarius, because of his Jan 22 birthday.

Apart from his parents, Brad also had a younger sister in the family, Ashley Nicole Ryon. Ashley is married to a guy from Texas, whose first name we don’t know and whose last name is Ryon.

Ashley and Mr. Ryon married each other in a lavish Texan wedding in 2016. Brad and Ashley’s grandparents also attended the wedding and were “absolutely slaying (that) Texas wedding” with cowboy attire. And so far, Ashley has two daughters Paisley Ann and Luxley Rose.

Brad’s other features include a balding head, square-frame glasses, and hazel eyes behind those glasses.

As of early June 2021, Brad had a decent following on social media platforms. Especially on Instagram, he had quite a bit of following, i.e. 10.4k. He was also present on Twitter but did not enjoy as many followers as on Instagram. On Twitter, he had only 2.4k followers.

Brad was also present on Facebook. He had a regular profile and not a page or anything where people could follow him.

When it comes to his profession, Brad is an actor (just like his wife) and had appeared in minor roles (most of them uncredited) in a few movies. He had a couple of credited roles in a movie called Hyenas and a movie short called See You on the Other Side. He also garnered a few uncredited roles in movies A Midsummer Night’s Rave, Telling Lies in America, and It Runs in the Family.

However, Brad’s main profession is in marketing. He started his career in marketing in June 2010, when he got a job as a marketing director of Key Club in West Hollywood. He left the job in 2012, after working in it for over 2 years.

He also worked as a Cultural Ambassador of Little West for over 6 years between 2013 and 2019.

In July 2019, Brad joined Super Evil Genius Corp as a Marketing Director, ending his long line of jobs as a social media director. According to our sources, the average salary for a marketing director in California was $166 thousand.

For his college education, Brad went to California State University – Northridge. He graduated with a Bachelor’s degree in Communication and media studies.

Brad Hoss And Stephanie Beatriz: Wedding, Any Children Yet?

We are going to repeat this one more time: Brad Hoss is married to actress Stephanie Beatriz. If you do not know Stephanie, she is actually one of the most renowned actresses in American Television. Stephanie was born in Argentina and later moved to the US. She is most famous for her role as Rosa Diaz in NBC‘s police comedy show Brooklyn Nine-Nine.

Brad and Stephane started dating sometime in late 2016 or early 2017. Their first public outing as a couple was for the 2017 Golden Globes in January 2017. After dating for about a year, they got engaged in October 2017.

After a year of planning and preparation, they tied the knot to a beautiful and intimate wedding in October 2018. The wedding was attended by only 300 people, among them were friends and family and Stephanie’s co-stars from Brooklyn Nine-Nine.

The wedding and reception as a whole was an LA-themed affair, which Brad and his wife planned on their own. In fact, the reception venue had special rooms celebrating the best parts of LA. And there were food trucks instead of buffets, not very traditional. 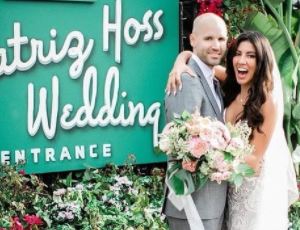 Brad Hoss with his wife Stephanie Beatriz during their wedding circa 2018 (PC: fan IG of Nine-Nine)

Until early 2021, Brad and Stephanie had no children yet. It might be possible that because Stephanie was busy with her acting career (the final season of Brooklin Nine-Nine is coming out in August 2021) and Brad with his marketing. June that year, however, Stephanie shared they were expecting their first child. Speaking to PEOPLE Magazine, the actress revealed she didn’t know she wanted kids until they met.

Brad and Stephanie welcomed their first bundle of joy, a baby girl named Rosaline, in Aug 2021. Via Instagram, he announced, “We brought Rosaline (Roz-uh-line) home last week, and it’s been a wild & crazy & amazing adventure every step of the way.”