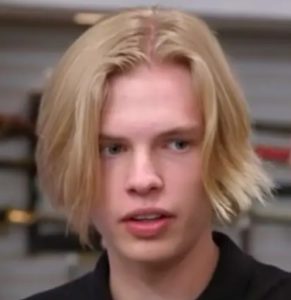 In 2021, there had been a new addition to the Pawn Stars–that was Rick Harrison’s son, Jake Harrison. Learn about his Pawn Stars stint and net worth in this Jake Harrison wiki. Also, get insights into Jake’s age, family, and girlfriend.

Rick Harrison first teased about his son’s appearance on Pawn Stars on March 29, 2021, via an Instagram post. He wrote, “Bringing my youngest son into the family business. Jake makes his debut on Pawn Stars all NEW episode tonight 9/8 c on HISTORY.”

Bringing his son midway through the 18th season of Pawn Stars, Rick explained to Corey and Austin that Jake would be working with them in Famous Gold & Silver Pawn Shop as a part of his summer job.

Corey and Austin were skeptical of Jake’s ability at first. “Jake, with hair like that, you should go to a beach and be a lifeguard, man,” Austin said whereas Jake’s brother Corey asked him if he was a glutton for punishment. But, in no time, Jake proved them wrong.

Jake demonstrated strong abilities in distinguishing between fake and real artifacts when he successfully distinguished a fake Rolex, which Austin had mistaken for a real thing.

Later, even Austin aka Chumless accepted that Jake was a “natural” at Gold & Silver. He told, “Dude, Jake’s been amazing around here… He’s even almost better than me, but I did teach him everything he knows, so it would be expected.”

However, Corey still wanted his brother to pursue some other career and warned him to not get trapped at Gold & Silver for his whole life.

While we don’t know about Jake Harrison’s exact age now, he was 14 in October 2017. Jake’s dad Rick mentioned Jake’s age in an Instagram post made on October 27, 2017. As of this writing, we had no idea about Jake’s birthday. His zodiac sign is unavailable too.

Jake is Rick’s only child with his second wife, Tracy Harrison. Jake’s father and mother were married from 1986 to 2011.

Before marrying Tracy, Jake’s father was married to Kim Harrison. They were married from 1982 to 1985. Jake has two children, Corey and Adam, from his first marriage with Kim. That means they are Jake’s half-siblings.

Rick’s third wife is a woman named Deanna Burditt. The two married in July 2013 in Laguna Beach, California, in front of 180 guests. Reportedly, the pair secretly ended their marriage with a divorce in 2020.

Jake Harrison stands a little taller than his dad at a height of 6 feet 1 inch. He weighs no more than 70 kilograms. His distinctive characteristics would be his blonde hair and hazel eyes.

Jake Harrison was absent from all kinds of social media platforms including Instagram and Facebook as of August 2021.

Coming to Jake Harrison’s job and net worth part, the 18-year-old lad did not have his own source of income. He instead relied on his father’s gigantic fortune net worth of 9 million dollars to make a living.

Jake’s dad, Rick started his first business of selling faux Gucci bags by dropping out of his school. When Rick and his dad Richard started the family business, it was just Gold & Silver Coin Shop. It was only in 1989 when they rename their business and turned it into a pawn shop.

Around 2003, Jake badly wanted to begin a reality show, which would document their pawning family business. His wish finally got fulfilled when Pawn Stars aired on History Channel in 2009 and went to become one of the most-watched TV shows in the network’s history.

A big part of Jake’s dad’s fortune also comes from his real estate, The Pawn Plaza, located right next to the Gold & Silver Pawn Shop. The Pawn Plaza houses restaurants and attractions, some of which are Gus Dean’s Ince Cream, Chumlee’s candy shop, Rick’s Rolling Smoke BBQ, among others.

Trivia: Rick Harrison holds conservative views and is an avid supporter of the former president of the United States, Donald Trump. Rick and Jake also have a picture together with Donald Trump which was taken on September 20, 2018, at the Las Vegas Convention Center.

As of this writing, no details about Jake Harrison’s girlfriend had surfaced on the Internet.