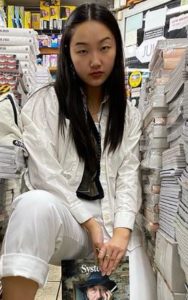 Audrey is a New Jersey rapper/singer best known for the song Comic Sans featuring Kentucky rapper Jack Harlow. The up-and-coming female rapper is here to secure her position in a genre dominated by African American personalities.

This wiki-style article is devised to act as a window into the life and professional endeavor of Audrey (Rapper).

Audrey Chu turned 20 years old in 2019. She was born and raised in Manalapan, New Jersey, the United States. She hails Korean-American ethnicity.

Audrey’s father was an entrepreneur in the clothing industry whereas her mother was the one who got her prepared for her newly established music career.

Audrey has kept the names of both of her parents a secret but she occasionally takes a moment to appreciate her nearest and dearest ones. She posted pictures of her parents with a caption of some guardian angels.

She went to Clive Davis Music Institute, New York University but took a gap to focus on her music.

She was no stranger to music though she started in the industry with no prior connections. Growing up, her mother took her to vocal lessons and piano classes.

Audrey had her first on-stage performance when she was 10 just years old. She sang The Star-Spangled Banner and America the Beautiful in the 2009 U.S. Open Tennis Championships.

Audrey’s lucky stars shined when Roc-Nation producer and her now-manager Anwar Sawyer DM’d her on Instagram. Together, they created her whole catalog of diverse music which has garnered Audrey a burgeoning fan base.

Audrey cited Kendrick Lamar, Kanye West, and A Tribe Called Quest as her Hip Hop inspirations whereas Whitney Houston and Sade for the vocals and harmony.

Audrey eventually signed to Sony’s Arista Records.  She released her record label debut song Time and co-directed the video for the song with Grammy-nominee Emma Westenberg.

With fans getting introduced to Audrey’s music, it was not a surprise to dig deeper into the relationship status of the beloved rapper.

Going through her social media accounts, her dating status is a blank space. She hasn’t left even a subtle hint of having a boyfriend.

She has well-kept her personal life very private in that case.

Heralded as the foremost champion of the “East Coast” sound, Westside Gunn is a revered lyricist...