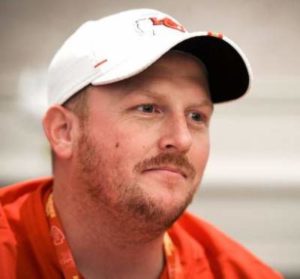 Britt Reid, known as the football coach for the Kansas City Chiefs of the NFL and before that as the son of superfamous Andy Reid, is about to meet with some serious trouble with the law.

We are of course talking about the terrible car accident that occurred on 4 Feb. 2021 night leaving a 5-year-old in critical condition. So, how exactly is Britt guilty of the incident?

Find out in the writing below. Also, get to know him on a personal level.

In a search warrant obtained by KCTV, officers said Britt reeked of booze and had bloodshot eyes in the moments after the accident. Further, it read Britt had admitted to officers how he consumed 2 to 3 drinks earlier in the evening and was on Adderall, his prescription medication.

Officials confirmed the crash occurred around 9 pm just minutes from Arrowhead Stadium. They believed Britt was driving a pickup truck that slammed into 2 cars that were pulled over on the side. Reportedly, one of the cars had run out of gas and had called for another vehicle to assist just when Britt’s truck came crashing into both vehicles.

Days after the car accident, the Kansas City Chiefs placed Britt on administrative leave. In its statement, the NFL outfit said— “We remain in the process of gathering information on the incident, and we will continue to assist local authorities as requested. Our focus remains on [the girl] and her family. We have reached out to the family to offer our support and resources to them during this difficult time, and we will continue to pray for her recovery.”

The aforementioned car accident is refocusing attention on events involving Garrett Reid’s untimely death due to an overdose of heroin back in Aug. 2012.

Garrett, unofficial strength and conditioning coach for the Eagles, was 29 at the time. He is one of Britt’s four siblings. Britt being the second born has two sisters Drew Ann and Crosby, and a brother named Spencer.

The family, all together, are members of The Church of Jesus Christ of Latter-day Saints. Britt’s dad converted from Lutheranism after meeting Tammy, his mom. The Reid parents have been married since 1981. They were both students at Brigham Young University in the early 1980s when they started dating.

Britt Reid stands 6′ 2″ in height and a lately reported weight of under 85 kg.

It seemed Britt deleted his socials after he notoriously met with the car accident. Just so you know, Britt comes with a troubled past having been sentenced to 8 to 23 months in jail and five months probation on gun and drug charges back in 2007 in a crime of pointing a handgun at another motorist.

At the time, he identified as the linebackers coach for the Kansas City Chiefs of the National Football League. His coaching career has primarily been with his dad Andy. He learned to walk in his dad’s footsteps being a Practice Squad Coach Intern with the Philadelphia Eagles. He also served in different defensive coaching positions for the Kansas City Chiefs since 2013.

About his salary, let’s make a healthy presumption from the Forbes reports published in 2011. It said someone as a linebacker coach for NFL would be expected to earn in the high six-figure range to over $1 million depending upon their accomplishments and tenure they served in for.

The highest-paid head coach earned $7 million per year with the average NFL head coach salary coming in at around $3 million per year. Assistants such as linebacker coaches would be expected to earn in the high six-figure range to over $1 million depending on tenure and previous accomplishments.

Britt Reid is a married man. He and his wife Kristen Nordland tied the knots on July 6, 2012, and registered their big day with the knot Registry. The wedding took place at Villanova, Philadelphia, and was presumably kept away from the prying eyes of media and the public.

Several years later, they seemed to be happily parenting their three beautiful kids: son, Maverick, and daughters, Somers and Saylor. 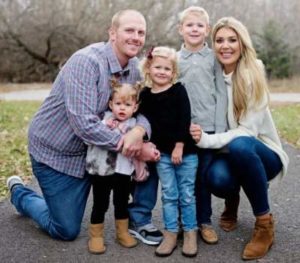 Britt and Kristen seemed to be leading a very private life keeping their kids away from the spotlight. While Britt’s social media seemed to have been removed, his wife too kept them private from the public. Anyway, it looked as if the family of five lived somewhere around Overland Park, Kansas, from where Britt and Kristen can bring out a balance in their life working close enough from the home.

Britt’s wife, in line with her LinkedIn page, is a Public Relations, Marketing, and Advertising Professional with a BS in Public Relations and Communications (2007 – 2011) from Temple University. She also went to the Catholic University of America.

Besides, the resume read: Kristen has been a model managed by Reinhard Model and Talent Agency since March 2011.

Before officially starting the modeling career, she worked as the assistant to Hillary Kahan at Mary K. Dougherty and Associates. She also comes in with the experience of working with Athletics Media Relations at Temple University and that of Media Relations Intern at Philadelphia Eagles.

She probably met Britt on the latter job where Britt too started as an intern sometime in 2009.