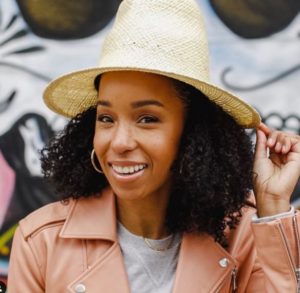 Maya-Camille Broussard is one of the four contestants of Netflix’s Bake Squad. Ahead of the show’s premiere in Aug 2021, she shared that she was ready for the competition. A culinary artist who is also active on a social cause is something new in the cooking competition. So, fans are eager to know what new she brings to the table.

Scroll down this Maya-Camille Broussard Wiki to learn more about Bake Squad, age, and husband.

In January 2021, Maya-Camile Broussard turned 42 years old. She received birthday wishes from her friends and family on 4 January every year. This made her Capricorn by zodiac sign.

Maya-Camille Broussard was born to her father Stephen J. Broussard and her mother Camille Billingslea. Her parents’ marriage ended in divorce after her birth so she had no other biological siblings.

Stephen J. Broussard, Maya-Camille’s father, was Northwestern Law School alumni and had an instrumental role as an integral member of ‘Takeover’ at Northwestern’s Bursar’s Office. By profession, he was a defense attorney and an actor in community theater. In both fields, he had a larger-than-life presence.

In Northwestern, discrimination was extremely prevalent and the organization of black students demonstrated for 38 hours. Maya-Camille shared that when her dad attended the college, Black students were not given fair on-campus housing options, could not participate in the activities of Greek-lettered organizations, and were even denied entry to the school’s swimming pool.

Stephen and his colleague played a huge role in establishing an equitable setting for the Black students to attend Northwestern Law school. So, in honor of her father, she established Justice of the Pies.

Justice of the Pies was formed as an L3C and considered itself a social mission in a culinary art form. The goal from the very beginning was to positively impact the lives of those who work with us. They also run a work-shop for elementary-aged children from lower-income communities instruction on nutritional development, acquiring basic cooking skills, and encouraging creativity in the kitchen.

Stephen, who was a role model for Maya-Camille, had a seizure in February of 2009 and passed away. He had a tumor diagnosed in 2004.

Talking about her mother, Camille Billingsley hails from Chicago, Illinois. She started living in Joliet, Illinois. On her Facebook, she had 43 friends but she never did anything after May of 2019.

Other family members include her two aunts Patricia Broussard and Sandra Broussard. Aunt Patricia is vocal about political stuff and is a traveler who has been to Spain and Italy among other places.

Yes, Maya-Camille Broussard was hearing impaired and had to depend on the hearing aid since the age of 2. She only started talking at the age of 4. A speech therapist told her mother that she was likely “Deaf and dumb.”

So, most of her elementary school years were spent attending speech therapy. Maya-Camille was bullied growing up and they even named her “Helen Keller”, “Miracle-Ear”, and “Bell Tone.” Her social study teacher suggested that she put her hair down to pacify the bully but she didn’t.

Not only kids but Maya-Camille was also bullied by the adults.

Maya-Camille shared that, she was a proud member of the Dead and Hard of Hearing community.

Maya-Camile Broussard is on Instagram (@mayacamillebroussard) with 2,854 followers. She had 35 posts and a verified account. On Facebook, as of Aug 2021, she had 2.2k friends. On Twitter (@TheMCBProject) she had 1844 followers where she tweeted 15k times.

The culinary career of Maya-Camille Broussard paid off with an accumulated net worth of $600 thousand.

Along with that, Maya-Camile joined The MCB Project as Art Consultant & Designer starting in December of 2011.

In the purple pride section of Northwestern University, Maya-Camile shared about making her mission to positively impact the lives of children struggling with food insecurity. This also extended to the workers working on the frontline during the pandemic.

In August 2014, Maya-Camile came back home to Chicago. She kick-started a campaign and raised $7,000. It funded her new business. She formed an L3C (a low-profit limited liability company) in February 2015 and she started doing farmer’s markets that spring.

For her social works, Maya-Camile draws inspiration from her mother. Another woman was Claudia Gordon who was her mentor and the first black deaf attorney to graduate from an American law school. She also noted the spirits of her grandparents who personally influenced her as they gave her no reason to complain.

According to Maya-Camile, her grandparents never went to high school and still ran businesses. In the same interview, she shared that her hospitality approach was to create amazing products, clean and distinctive branding, and awesome customer service.

Maya-Camille Broussard is open about her family details but when it came to her personal details she remained extremely lowkey. She is definitely not married yet, and her relationship status as of this time remains unclear.

But, her Twitter account had some tell-tell signs about her dating life. In February of 2015, Maya-Camile joked that her boyfriend Devin was in grad school who still drove a 20-year-old Volvo. She also wrote a tweet dedicated to her future husband that she doesn’t ask for much but she might ask for and gave alike, the content of which has been removed. The tweet was created in 2010.

As for her thought about dating Maya-Camile wrote, “Perhaps you could meet quality women at a speed dating event. After all, we’re not a club. We create artistic social gatherings…thoughts?”